A Jewel for Adi 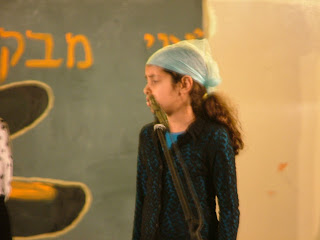 Today was Holocaust Remembrance Day, and Avi and I went to see Meital in her school play. The fifth graders performed a stage version of a book called העדי של עדי. The title has been translated into A Jewel for Adi in English. I don't think the whole book has been translated, though. Meital had a small but key role; she plays a Polish woman who saves the life of a young Jewish girl named Rosa by arranging to have her hidden at a local nunnery. The Adi of the title is the granddaughter of Rosa, who learns her grandmother's story when Rosa gives the young girl her treasured locket, which had been given to Rosa by her own grandmother shortly before the Nazis rounded up the Jews.

The photo is not very good, but Meital did a wonderful job. After hearing her practicing her lines up in her room over the last few weeks, and listening to her express how nervous she was, it was so rewarding to see how well she did. In addition to the play, there were songs and dances suited to the occasion, and an art exhibit also on the subject of the Holocaust. The art of every type was performed and/or created by the fifth graders.

The children performed the show twice, once for the first through third graders, and the second time for the fourth through sixth graders. The Holocaust is part of the curriculum from preschool through twelfth grade here in Israel, though of course the content is geared toward the age level. There is an interesting article on the Yad V'Shem website (that's the Holocaust Museum in Jerusalem) about teaching such a subject to children, if you are interested.

At the high school, the ceremony was organized by the twelfth graders. Liat told us that one of the students read something she had written after her grandmother, a Holocaust survivor, died just a few months ago.

Avi and I didn't get much done today. It was hard to concentrate after the emotional morning spent at the school.
Posted by AmyS at Thursday, May 01, 2008

Amy, thank you for the very interesting post today. Of course, Meital did well as you have very intelligent daughters.

Wow. And thank you.

You have such a talented daughter. On our news, they would show the traffic absolutely stopped in Isreal, and people standing outside their cars, some with their hands over their hearts. I am tearing up even as I am typing this, it was very poignant to just see that.