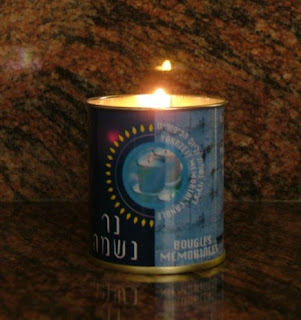 I have another one of my nasty headaches today. It started last night, while I was watching the Memorial Day ceremony held every year at the Western Wall in Jerusalem. Every year, after the ceremony, there are programs that feature a number of different soldiers and victims of terror, complete with interviews with family members and friends. By the time the program was over, I had cried so much that my headache had already entrenched itself.

So, rather than write about Yom Ha'Zikaron (as it is called here), I will refer you once again to my website, to an article I wrote several years ago.

As I type this entry, Yom Ha'Zikaron has ended, and Independence Day (Yom Ha'Atzmaut) has officially begun. The transition between these two days is made by the raising of the flag from half staff to the top of the flag pole, at the end of the concluding ceremony for Memorial Day. The ceremony marking the start of Independence Day begins immediately thereafter. As I said yesterday, it's a bit schizophrenic, but somehow it seems to work for us here.
Posted by AmyS at Wednesday, May 07, 2008

Amy, I read "The Knock On The Door". It is beautiful, yet very sad. Everyone should read it. Thank you for sharind. Hope your headache is better.