"To beam-with-immense-pride-and-pleasure, most commonly over an achievement of a child or grandchild..."
~ Leo Rosten, The Joys of Yiddish 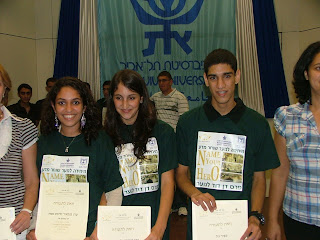 We learned a few weeks ago that Liat (on the left), her good friend and partner in this project Eden (center), and their classmate and friend Kfir (on the right) had all been awarded prizes in the Name Your Hero Youth Competition, which is part of the distinguished Dan David Prize. Tonight, we attended the awards ceremony, which was held at Tel Aviv University. The kids were three of only twelve students in the country to win the prize. The high school they attend also won a prize. 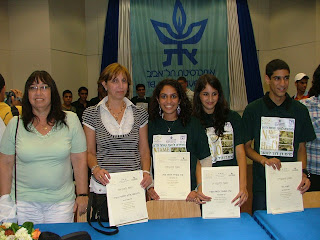 From the left are the Vice Principal and Principal of the school, which is actually a combined junior-senior high school, then Liat, Eden and Kfir. 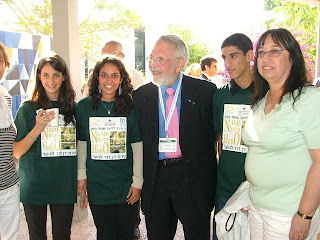 Mr. Dan David not only funds the Name Your Hero Youth Competition (each student received 2,500 New Israeli Sheckels, except for Liat and Eden, who split the prize because they worked together), but the Young Researchers Scholarship as well. In addition, he awards cash prizes to select individuals each year. The details are on the website linked above. 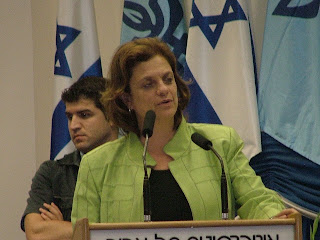 The certificates were handed out to the students by Yuli Tamir, the Minister of Education. Her bodyguard didn't hand out anything. 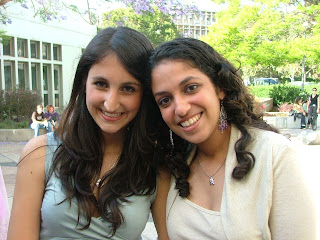 Something I find especially wonderful is that Liat and Eden 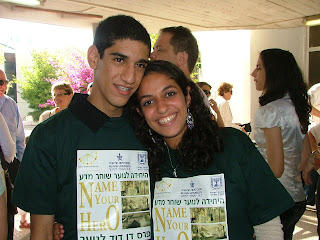 and Liat and Kfir have been friends since they were in preschool together starting at age 3.

Oh, and by the way, along with a few professors... 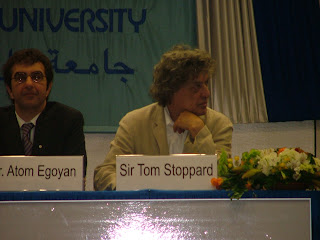 there were a couple of other 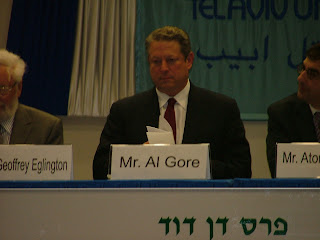 prize laureates there this evening.

Wow! Congratulations are definitely in order to all of them and especially to Liat. What a thrill that must be.

Amazing how your child is coming along!!!! I know you are proud but it is REALLY something to be proud of. I am so happy for you.

What an honor! This is definitely one for the geneology history book! Congratulations to Liat and to you, Amy, for raising such lovely daughters.

Love the shirts and Al Gore, wow! What a great evening for your family!