There I was on Sunday, knitting away on the knee sock, obsessing over the approaching short row heel.

My friend Lizzie suggested I consider the possibility of an afterthought heel. I have seen photos of afterthought heels, the kind of photo where the sock is folded so that the toe is flat and the heel looks more like a codpiece (warning, somewhat graphic pictures on that link) than anything one would want to put on a sock. I dismissed that idea out of hand.

To soothe my troubled spirits, I worked on the Fetching wristwarmer. Followed the instructions blindly, then looked down to see this: 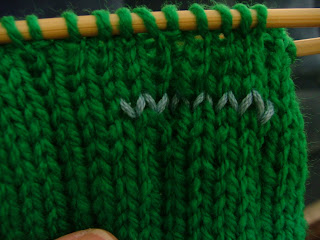 Hmmm... Here I have knit a few stitches with waste yarn, then knit them again with the working yarn and continued on around. The instructions tell me to go back later and pick up those stitches on the waste yarn, thusly: 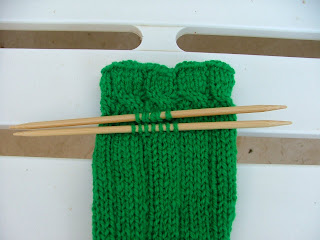 and then knit around for a few rounds to form the thumb. 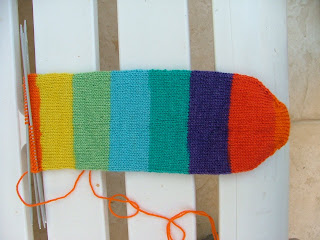 Then, while knitting in the car the other day, I heard Liat say, "I really like those stripes on the sock, Mom." Oh drat. When I get to the dreaded short-row heel, it will mess up my stripes. What to do? Would skipping the short row heel be a cop-out? Wouldn't knitting a different kind of new-to-me heel be just as good as far as furthing my knitterly education goes? 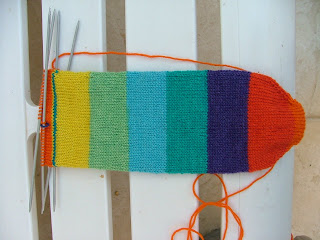 We shall see. That single line of blue stitches is where the codpiece, er I mean afterthought heel, will go.
Posted by AmyS at Wednesday, June 11, 2008

I'm anxious to see what that heel will look like. Please tell me that the Fetching mitts are a quick knit. It is on my list to do for my "Pay It Forward" friends.

When I was in the SCA, one of the guys had a codpiece that was a dog's head. There was a "hidden" string attached and when an attractive wench walked by, he'd pull the string, the dog's mouth would open and this foot long tail would roll out! Hilarious!

The round afterthought heel is not attractive in pictures, but I find the fit great. Use Dawn Brocco's heel. Oh and use her toe, too, it disrupts the colors less than the standard toe does!

If you have a copy of Charlene Schurch's Sensational socks look at the sock pattern starting on page 70, Chevron patterns for self-striping yarn. I think her "forethought" heel idea might be what you are looking for.

I have no great claims to sockknitterhood, but I'm sitting here picturing it with a different yarn brought in for a heel; that sock is a study in contrast and brightness and cheerfulness.

I look forward to seeing your results, I have never done a heel like that.

Beautiful, AND brilliant. I can't wait to see the result!