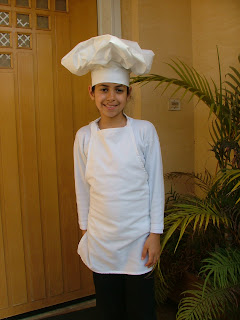 Actually, today isn't really Purim. But it is the day that most kids in Israel celebrated Purim at school. As I drove through Netanya today, I saw kids of all ages (even teenagers) dressed in a wide variety of costumes. Even grown-ups join in the fun. Meital's teacher, for example, dressed up as a doctor. And I saw a woman pushing a baby stroller who wore a shower cap, green goo on her face, a bathrobe with a towel thrown over her shoulder, and slippers. 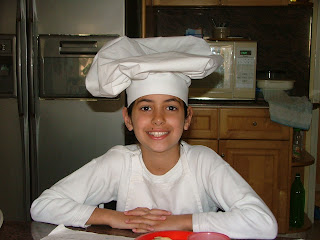 I made the chef's hat using this pattern. It was made using more of Avi's former shirt, and what used to be a homemade curtain in Meital's room when she was a baby. 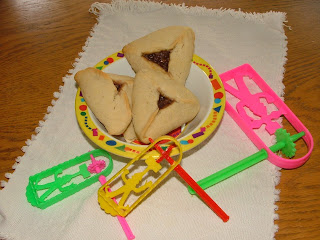 A vital part of the Purim celebration are mishloach manot, which are rather like goodie baskets. Here, we use a plate or some other container to heap the goodies in. Most people wrap it up with colored cellophane. The mishloach manot usually includes a variety of candies and some kind of salty snack like potato chips or Bamba - arguably the most popular snack food in Israel. However, the single most important part of a mishloach manot are the osnei haman (better known in the rest of the world by its Yiddish name, hamantaschen). The traditional filling for this cookie cum pastry is poppyseed, though as a kid I loved the prune and apricot fillings the best. But my fabulous mother-in-law came up with a strawberry-pecan-cinnamon filling that is absolutely the best thing ever! So that's what Liat and I made last night. About 4 dozen of 'em.

The plastic "toys" you see in the photo are actually noisemakers; groggers in Yiddish and ra'ashanim in Hebrew (you're getting quite the Hebrew lesson here, eh Laela?). During the reading of the Book of Esther (a required feature of the Purim Holiday), listeners make all the noise they can every time the evil Haman is mentioned (a common Jewish curse is to say after the mention of an evil person: "may his memory be erased.")

In America, I celebrated Purim at Sunday school in the synagogue, mostly by wearing a costume and participating in a Purim carnival. We have those here, too, and our neighborhood carnival will take place on Saturday evening. So the fun's not over yet.

Such a great picture of Meital!!! The hat is great and you've given me another idea. I enjoy hearing anything regarding your traditions. It sounds like so much fun!

Wow, the hat came out really great! She looks so cute! Hope you enjoy all of your celebrations - sounds like a lot of fun.

Love the cook-hat!!! And such a fun picture of your daughter :)

The noise-making toys remind me of a big wooden "ratelaar" my granddad made a long time ago. My mum used to rattle it down at the stairs when dinner was ready so my sister and I would come down stairs to eat heh :) That thing made soooo much noise though! :)

I am a Daisy Girl Scout Leader. One of our girls went to the Carnival and I would like to get her a fun patch for going. Can you tell me where I could find one?