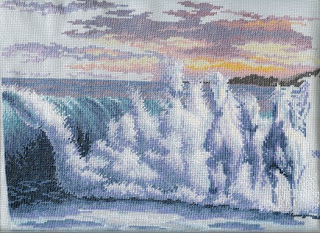 In Hebrew, "eem kvar, az kvar" literally means "if already, therefore already." But really, the intent is more "in for a penny, in for a pound." Since, in honor of my sister's birthday, I dragged the old cross stitch hobby out of the darkened and locked closet, I thought I might as well show you some of my UFOs (UnFinished Objects), or as I prefer to think of them, WIPs (Works In Progress). The photo above shows one of them, The Wave. It's a kit by Dimensions, for those who might care about such things. I think I may have started it back in 2002. Might have been earlier. It's actually closer to being finished than the photo shows, but I haven't touched the thing in years. Sad, isn't it? 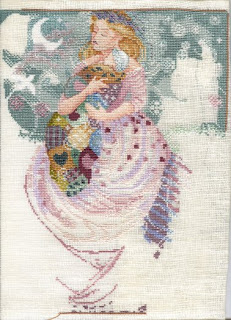 Now, this is my oldest WIP. I started this beautiful project (Mother's Arms, by Mirabilia) back in 1998, when Meital was just a little baby. My baby just had her tenth birthday! Obviously, I have a long way to go. I may have done a smidgeon more on it since this photo was taken (in 2003, for goodness' sake!), but not much.

These projects, and their companions in that metaphorical closet, have been weighing on my mind, even more so since I started the small house picture for my sister's card. I'm nearly done with the house, but I have been giving alot of thought to adding cross stitching back into the mix of my daily life. I wonder if I can manage it. Most likely, the hardest part will be seeing what on earth I'm doing. I need to invest in a good magnifier, I think. The old gray mare, she ain't what she used to be. If you know what I mean.

Maybe I did wake up that giant, because I keep hearing, in the back of my mind, "eem kvar, az kvar!"