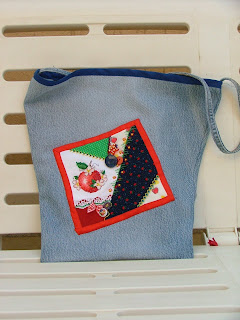 I am thrilled, relieved, and amazed to tell you that I have actually finished a project! This denim bag, made from a ratty old pair of Avi's jeans, sports my first-ever attempt at a crazy quilt patch. 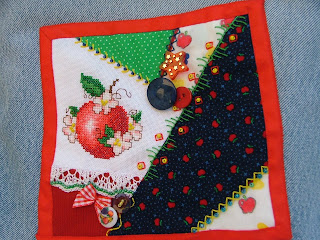 The central motif (which is not, obviously, in the actual center of the block) for the patch was the apple cross stitch pattern, designed by the incomparable Pam Kellogg. I made a number of mistakes and bad choices with this block, but I like it anyway, and think it's not bad for a first effort. I definitely intend to get a lot more practice!

The best thing about this project is that it uses many of my hobbies. As I've mentioned before, I've long had that as a goal - to find a way to create something that incorporates most, if not all, of my interests. In this project we have: (1) cross stitching, (2) knitting (that bit of lace at the bottom left), (3) stamping (the tiny apples on the white fabric), (4) embroidery (a new interest, though when I was a teenager I enjoyed doing crewel work), (5) beading, and (6) recycling.

Obviously, the jeans themselves were recycled to make the bag. I used the legs, which is one reason I ended up with this shape. I know, I could have cut the fabric into a rectangle, but I like the trapezoid shape. In addition, the strap is the seam from one leg of the jeans. But there's something else that's recycled in this bag. A couple of months ago, Liat reluctantly conceded that one of her favorite pairs of pants was finally beyond repair. Before tossing them, I removed all the hardware (buckles and zippers) and four different colors of beads which had adorned one of the legs. The green beads on my piece of knitted lace are from those pants.

Meanwhile, the TSGFSVS is about 20 minutes away from being completed. Of course, I can't show you a photo until the Someone Very Special actually receives the Top Secret Gift. I've also spent a great deal of time over the past two days working feverishly on Liat's bookbag. Today I completed the central cross stitch design, as well as some other stitching. Right now, I'm sewing things onto the front of the bag, which I have already sewn together. I know, this makes doing all the embroidery and embellishing much more difficult, but I needed to have the shape of the bag clear in my mind before I put in too much effort on the decorations, so I decided to do things in this order. Hopefully, it won't be too much of a problem. I would really love to get this done by tomorrow afternoon or, failing that, very early Thursday morning. That way, Liat could take it to school on the last day before she starts her Spring break. In the interests of accomplishing that, I may end up going easy on the embellishments, and even skip putting in a lining. If there are a lot of threads, etc on the inside I may have to line the bag, so that the thread won't catch on the spiral bindings of Liat's notebooks. Hmm...

Two other small items of interest include the fact that, in her continuing quest for a pet that will not aggravate anyone's allergies, Meital has domesticated a tiny snail from our garden. Now, this is really a teeny, tiny thing, not the huge things I remember from the garden of my childhood. But still... it's a SNAIL. Sigh...

The other thing is that after twelve years of living in this house, for the first time close neighbors of ours have moved away. Nechama and Itzhik lived directly across the street from us for the last twelve years. We were part of the group that initiated the then brand-new neighborhood. They lived for many years in Texas, but had just moved back to Israel with their three grown children when we met them. They are such sweet and friendly people. They've moved to be closer to their daughter and her family. I will miss them.
Posted by AmyS at Tuesday, April 15, 2008

I really like the bag, Amy. Is the dark blue at the top part of the original jeans or did you add that. As for the snail, we won't tell Meital about escargots!

It turned out great, Amy! Very cool idea to use the seam for the handle. Would never have thought of that!

It's a very nice representation of all your varied talents.

grr, tried to leave a comment, said I needed a new account. sigh. good stuff you have going there.