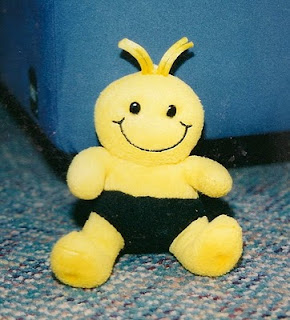 Buzz Buzz's story began quite a few years ago. When Meital, now 12, was in preschool, she came to me and told me she wanted to "write" a story. I sat down at the computer and typed out the story exactly as she told it. Here it is:

Once upon a time there was a little bee called Buzz Buzz. He lived by the side of very far away. Buzz Buzz liked to do lots of art things. He decided to do something made from clay, and he painted a picture.

He came home and gave his mother some honey.

That was only the first of many stories of the adventures of Buzz Buzz. I bought a binder and put each story, complete with illustrations by Meital, into page protectors inside the binder. I designed and cross stitched a cover for the binder. As Meital grew, Buzz Buzz acquired friends with the same names as Meital's friends in preschool, learned the ABC and so on.

Meital and I had many talks about Buzz Buzz, and when she grew a bit concerned I assured her that many children have imaginary friends and it's just something fun, that I had had one myself, and so on.

In the summer of 2002 we went to Walt Disney World. On Meital's 5th birthday we went out to dinner at a restaurant in Downtown Disney, then wandered around doing some window shopping. It started to rain and we made a dash for the parking lot, which was at the other end of the walkway. We passed a shop and Meital stopped. When I called to her, she said, "Mommy! I've found someone who could be Buzz Buzz!"

Of course I stopped and went into the shop with her. I took a look and agreed that he would make a wonderful Buzz Buzz. We brought him home, and he was a very important part of Meital's toy collection for a long time. He came with us on every trip to the U.S.

But this past summer, 2009, somehow Buzz Buzz got lost. We didn't realize it until after we had returned home. I called the most likely hotels where he could have gotten lost, but no one had found a little bee toy with knitted pants (to cover up the growing hole in his belly).

I found the name of the shop where we had purchased him, and it was still in business. I asked a friend who was going to WDW to check for a bee if she made it to Downtown Disney, and wonderful person that she is, she did. I sent her the photo above to help her, but she learned that they no longer carried that product (it was originally a magnet).

Fast forward to this week, when Meital left on an overnight field trip on Valentine's Day. I had been working on a knitted elephant for her, and her absence made it possible for me to finish it up in time for her return the following day. I got the idea of putting out all of her soft toys and arranging them around the room. Liat and Avi had the thought that seeing all of the other toys would make her miss Buzz Buzz all over again. I was upset to think my surprise might make her sad, but they assured me that she would enjoy the spectacle of all of the toys on display.

Sure enough, she loved the surprise but was sad all over again about Buzz Buzz. She asked me if there was any way I could recreate Buzz Buzz in knitting. And that is just what I hope to do.

(I couldn't add photos of the new toy and the surprise, so that will have to wait for my next post).
Posted by AmyS at Friday, February 19, 2010 6 comments: 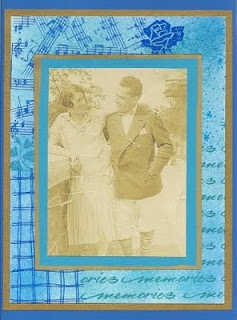 Of course this card wasn't ready in time to mail to the U.S. for Valentine's Day, but a pretty card (if I do say so myself!) is appreciated anytime, right?

I stippled and sponged a bunch of different blue inks onto a glossy postcard, then stamped a variety of Posh images on that, again in several shades of blue. The picture is a photocopy of a photo taken of my grandparents in New York City in 1925. I love my grandfather's spiffy socks! And I can't believe he's wearing a jacket and tie in July. Ah, those were the days...

I've also made a few more backgrounds, all ready for use in Valentines for my family. Some were made with Blending Blox ink pads (rubbed directly on the cardstock) and some using my Rainbow Sponge (which, by the way, is being discontinued by Ranger and is available on sale at Stamp A Mania!).

In other news, it turns out the pain and stiffness I've been feeling in my left shoulder are the result of a frozen shoulder. Yes, just like Avi got last year. Sigh. I may be able to get a cortisone shot for the pain, but first my doctor wants me to have a bone scan. That's happening next week. Meanwhile, the activity that bothers my shoulder/arm the least is stamping. I just wish I had more time for it. Work is very busy, lots of things to translate. And I have knitting I'd love to finish by Valentine's Day (to go along with the cards), but knitting isn't completely comfortable. I have, however, made fair progress on Liat's sweater, and am trying to finish up a little elephant for Meital (who has for some reason loved elephants since she was little...Maybe because when she was just a few hours old Liat brought her a tiny pink stuffed elephant?)

I very much hope to have more things to show you soon. Meanwhile, keep warm!
Posted by AmyS at Wednesday, February 10, 2010 2 comments: