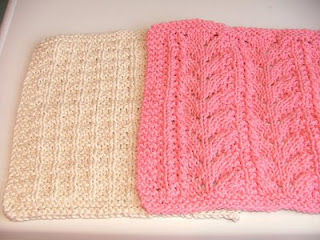 Here are the two washcloths I made as part of a hostess gift. Yarn is Sugar 'n Cream, and the patterns are the Waffle Knit Dishcloth from Homespun Living (cream) and Baby Fern Stitch Dishcloth (pink). They made a nice change of pace from my usual Grandmother's Favorite Dishcloth (the one knit on the diagonal) of which I have made many. These used up more than half of a 2.5 ounce (I used size 8 or 5mm needles) skein of cotton, but I was able to squeeze a Grandmother's Favorite out of the leftover cream colored yarn. Haven't tried with the pink yet, but since the pink cloth is a bit larger (though of course it is lacy which means it uses less yarn) I don't know if that will work. Or, I suppose I could knit to, say, 42 stitches instead of 44, before starting the decreases.

Meanwhile, I have been making some cards and am pretty pleased with them. They are a gift for someone, so more to the point - I hope she will like them! I am also trying to come up with a clever idea for a bookmark swap over on Club Posh. I'm having second thoughts about my first idea for that.

I hope everyone had a lovely Fourth of July. Ours was very un-Fourth like. Often we spend the Fourth in the U.S., which of course is way more fun than trying to celebrate it here (which we sometimes do. Just didn't work out for this year). Two years ago, the girls and I went to a parade with my father, where Uncle Sam was walking around randomly asking kids if they knew which birthday he was celebrating. Liat was the first person he asked who knew the right answer!
Posted by AmyS at Sunday, July 05, 2009

The dishcloths are beautiful. I especially like the pink one. Good for Liat that she knew who "Uncle Sam" was and what he was celebrating.

Amy, those are so pretty!

Those are such darling little washcloths! I love them and would love to make some. I need to learn to knit!

The Waffle Knit cloth is my favorite cloth to knit. Your's looks great and I love the lacy one, too.