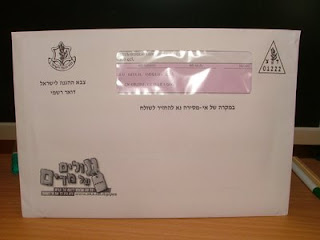 As many of you know, most Israelis - girls as well as boys - serve in the Israel Defense Forces starting at age 18. Boys usually serve for three years, girls for two.

Today, Liat received her first orders from the army. It's basically a call up to come to a physical exam and a written exam, with the option for an interview. Most kids get their first orders once they've hit sixteen and a half. Liat's half birthday was on Sunday, and she's been haunting the mailbox all week. She doesn't need to appear until June, but she's thrilled to have gotten the callup.

While she won't actually be inducted into the army until she hits 18; this is the first step in the process leading up to that. Over the years, she has gone from saying she doesn't want to serve in the army at all (about age 10) to insisting she wants to try to get into an elite unit, and rejecting the idea of doing any kind of desk work (such people are scornfully referred to as "jobniks"). I am happy she is looking forward to the experience, and a bit nervous that she wants a serious role (whatever that may turn out to be) instead of something that would enable her to come home every night instead of living on a base.

It's going to be a very interesting experience, for all of us.
Posted by AmyS at Thursday, February 26, 2009

O Amy I would be nervous about Liat serving. Guess mom's are so "over" protecting. But you have to let them "be them: & do their thing and decide.Sounds like it is an exciting time for you all. Doesn't seem like she should be old enough already !
The years are flying.
Elsie <><

Glad that Liat is pleased about it. As a mother, I'm not sure how I would feel about it whether or not my child were a son or a daughter. But we have to learn to let go. Does this mean that all young people's higher education is postponed during that time, or can it be done simultaneously?

As a prior service person and having been married to service person for 20 some years, I've been ever so thankful my sons have so far not been notified by the draft.

I have no idea what a war time military is like.... Best thoughts for you and Liat.

Interesting experience is a good summation. Fear, pride, determination, honor, trepidation, and loads of other emotions are headed your way. Maybe the dreams of many will come true and there will be no need for military forces EVER again.

Pride and fear. Trust me on this. You raise them to be independent, then you just have to let them be.