Is the year over yet? 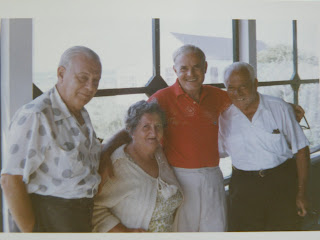 It's been a crazy year, and I'm looking forward to seeing the last of this one and the first of the new year. Around here, that will happen on September 18, Rosh Hashanah. Although my bad year officially began on 31 December 2008, I am hoping the start of the Jewish new year will signal the start of a year of good health and happiness for all of us.

Of course, some good things happened this year, especially in July and August when we went to the States to see family. We had a fantastic time, seeing people and spending time together. Of course I tried to use the time to further my genealogy research, too. The photo above is one I had never seen before, that my father found in a photo album. Pictured are four siblings: Uncle Phil, Aunt Hannah, Uncle Hal and my grandfather (dad's father). This photo was taken in 1965. A year and a half ago I didn't even know my father had had an Aunt Hannah; this is the first photo of her I've ever seen.

So yes, lots of good stuff happened this year, too. It's good to remember that.
Posted by AmyS at Tuesday, September 08, 2009

Amy, I knew you had been awful quiet these past months but never thought about it being a bad year for you.
I pray blessing over your coming new year for your house hold. May you be encouraged and may your days be filled with much joy .
I know life is hard in lots of ways over there as it is here in America for some of us. But we are survivers and you have a loving husband and two beautiful daughters s be blessed my blogging friend.