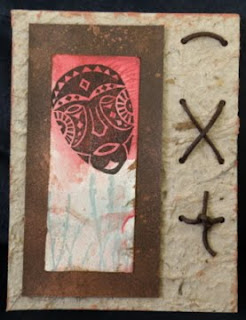 Over on Club Posh, the weekly challenge is to make scraplings with an ethnic/cultural theme. I had never heard of them before, but now I know that they are scraps of paper generally about 1.5" x 4". I think some people trim them off of a folded card so that the scrapling has a fold at the top, but I didn't do that.

I dabbed two colors of pigment ink onto a plastic plate (don't yet have one of those handy-dandy craft sheets), then spritzed it with glittery stuff (Perfect Pearls mixed with water). I put my scraplings into the resultant puddle until the cardstock soaked in some color. After it was dry, I stamped the African mask from the Posh African set (in black) and some grasses also by Posh (in pale green). I layered it on dark brown cardstock also spritzed with glittery stuff, then layered it onto some super-textured cardstock. I punched holes down the side and threaded in some cord that I had saved from the tag on a pair of jeans.

Feels good to get inky again! And this card is just in time for possible use as a birthday card. We've got a lot of those coming up in the next couple of months.
Posted by AmyS at Friday, September 25, 2009

Looks so very nice!!! It's so good to see you blogging more often like "old times".

You are so smart , My daughter in law makes beautiful cards like you do.
I used to make computer cards .
i feel lucky I can blog a little bit. Want to learn how to do more with it though.
Have a nice week end

Looks great! The cord is a great idea. It adds to the texture and natural feel of the card. I have those masks and have never used them. I also have tons of scraplings and I try and use them first when I need a bit of color.