Gibbs: "What's put you in such a fine mood?"
Jack: "We're catching up."
~ ~ ~ Pirates of the Caribbean, The Curse of the Black Pearl 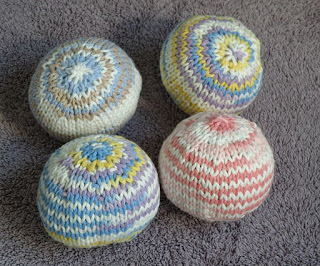 I don't know how the time always manages to get away from me. But I'll try to catch you up with the things I've been doing for the last few weeks. Above is a photo of some toys I made over the weekend. They're called Squishies, and they're from a book I bought this past summer called Itty Bitty Toys, by Susan B. Anderson. What a fabulous book, full of adorable and easy-to-make toys. I have heard (and saw for myself last night) that these simple, squishy balls are fun for kids of all ages. I used worsted weight cotton yarn to make them. I gave two away last night but have two left in my toy stash for the next time I have visitors. 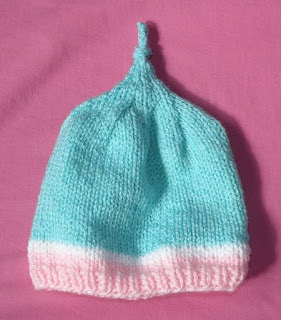 The picture here shows the second hat I made to go with the hat I showed you in my last post. This is also a free pattern from Susan B. Anderson and is available on the same blog I linked to last time. This is called the Watermelon Hat, but since I didn't have enough pink, I reversed the colors and called it a Not-er-melon Hat. Both hats have long since arrived in New Jersey and will be delivered to the children's hospital there.

And just today I finished up a preemie blanket that will be going to a hospital in California. Yes, I have already sent items to California, but since it is my home state I feel a special attachment. I'll show you the blanket the next time I post (don't want to show you everything I have all at once, that wouldn't do at all!).
Posted by AmyS at Sunday, November 13, 2011

Love the squishies! I have that book so I will have to revisit that pattern.

I think that you and Alison Hyde (I know you know Alison) are the two most charitable people I know and both from California! Thanks for all you do.

Be sure to check out my blog post today!

Squishes are a neat, fun way to play ball but not break anything.
Your baby hat looks so soft.
Love how your map is fillin' up.

Hi Amy,
I am a first time visitor to your blog. I came across pictures of knee warmers at: http://knittingbytheocean.blogspot.com/2011/11/blogging-friends-are-best.html and through that link to your blog!
I have been looking around desperately for knee warmers for my mum who is old and have severe pain in the knees in winter due to arthritis. I would love to give her a pair of woolen or fleece knee warmers and wanted to check with you whether you had another pait similar to the one you sent to your friend? I am guessing you knitted those but in case you bought them from a shop, could you please let me have the details. I would love t order these online and get them delivered by courier service, so that I can gift a pair to my mother on new year's eve! Could you help!
Thanks in advance.
Best.
D.