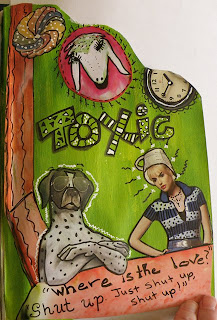 I really have no idea where I was going with this page, I just added things without thinking about it too much. I have had the dog and woman pictures cut out and saved for a few years now. Originally I thought I would use them on Artist Trading Cards (mini artworks on cardstock 2.5" x 3.5" that are traded with other artists, see some examples here), but I never did. I guess because they wouldn't have fit together on one card, and clearly they were meant to be together, no? Eventually I may add some text in that blank area; I haven't come across anything that just screams to be added yet, so I can't say for sure. I could very easily forget all about it! 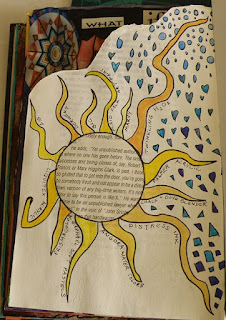 This is the other side of the page above. I colored in the rays of the sun with various coloring media - some of which I had completely forgotten I had (see last sentence of paragraph above). At the very least it was a good exercise in using what I have - and remembering what I have! I have moved on in the book and probably won't end up adding anything in that blank corner, either. But who knows?

Next time I hope to show you four pages that I did all in a theme. I just put the finishing touches on the fourth page today, but I am also working ahead on the next two pages. I have found another book I may end up altering, one that I've had for probably about 18 years or more, and haven't opened in almost that amount of time. Again, it's a reference and resource book that is way out of date (1988) and since I've written in the margins and highlighted in it, I would never donate it to a library. Sounds like a good candidate for an altered book, doesn't it? I think I may do the pages a little differently in the new book, because I am really not happy with the way the pages are when there are several glued together. They come out sort of rippled, and in some cases creased.
Posted by AmyS at Wednesday, March 28, 2012

Amy, I really think you should have a "one woman show" of the many projects you work on. Haven't seen any cross-stitch in awhile but that is something you are great at also.

You are really great at repurposing things! I'm so glad we are blogging friends.

This sounds really neat how you're altering a book in these ways.
Are you painting over the page first w/tempura paint to cover the print or gluing on construction paper?
How were you inspired to do this?