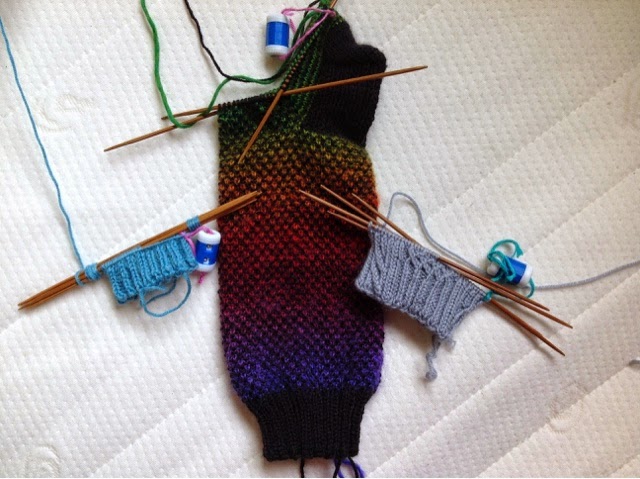 SOCKED IN: Closed in by bad weather, often said of an airport; fogbound; snowbound. This expression originally found in the context of flying, has its roots in the use of a windsock at airports to provide wind direction. The windsock, a large, open-ended, cone-shaped sleeve attached to a post by a pivot, at one time provided pilots with wind direction. When the weather deteriorated (fog or snow) to the point that the sock couldn’t be seen, the field was said to be ‘socked in’ and takeoffs and landings would be difficult to impossible. The expression is said to date from the 1940s.
I found that explanation of the term on wordwizard.com. Not sure it's accurate, but it certainly sounds reasonable.
Anyway... I am usually a one sock at a time kind of knitter. I have been known to work on two socks during the same period of time (each on its own set of double pointed needles). But today I have three socks going. The gray one with only about 16 rounds is the Amyrlin pattern (found on Ravelry). It is a beautiful design full of twisted stitches and cables, and it takes forever to complete just one round. I have finally gotten the hang of the design, though, and I think I may just be moving from a geriatric snail's pace to a middle aged snail's pace. Yay me. Yarn is Cascade Heritage, a lovely and soft yarn that is reasonably priced. Good thing the gal I am making these for is worth it!
The sock in the middle (working on the foot now) is the Broken Seed pattern also found on Ravelry. I am using leftover Cascade Heritage in black and Mini Mochi in Intense Rainbow. The pattern is super easy to memorize so the only hassle with these socks is juggling two balls of yarn. At first I didn't like the way the sock looked and I hate the Mini Mochi, which feels very fragile. But I am happier with it now that I have made more progress. I doubt I will ever buy MM yarn again, however. These are for me.
The third sock, just started today, is my go-to 2 x 2 ribbed sock in Fortissima Socka. Hoping to get a pair done for Meital in time for Chanukah, which starts on December 16.  I could practically knit this pattern with my eyes closed, so it moves quickly, but it will be a stealth knitting project, obviously.
Good thing I love making socks! So if you don't see me around much, it's because I'm socked in.
Posted by AmyS at Tuesday, October 28, 2014

Splendid projects! I thought he seed stitch sock was one ball of a colorway. What a neat effect there is from the two combined, like those black scratch offs where color is exposed.

Cute post, Amy. I have at least 3 pairs of socks going on also and when I knit on them depends on the availability of light and my mood. Your socks look great. TW...I've decided to spend less time on FB and more time reading knitting blogs.