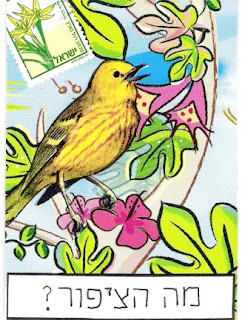 For the first time in I don't know how long, I didn't knit when I got up this morning (don't become alarmed, I did later on!). Instead, I started working on ATCs. I finished up a few I had started yesterday. Actually, this one I started months ago, then sort of ran out of ideas. The background is a label taken from a bottle of juice. The Hebrew says "What's the bird?" which works as a play on words in Hebrew just as in English ("What's the word?"/"What's the story?" - the word "story" in Hebrew rhymes with the word for "bird"). Quite serendipitous, that. 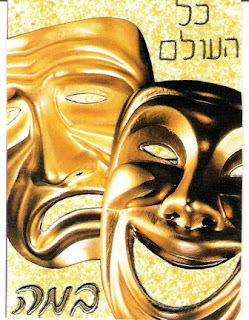 This card is one I just started last night. It was done to fit the November theme at ATCards, which is White & Gold. The Hebrew says, "All the world's a stage." Background is white paper painted with gold Radiant Pearls paint. Masks came from a local magazine. The letter stickers at the bottom left are one of my new purchases this past week. 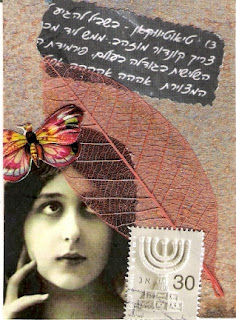 Now this card is one that uses a background I started long ago and didn't like. I simply added more colored walnut ink spray, and it really came to life. When that was dry, I added flecks of rust orange Radiant Pearls. The leaf and the butterfly are things I found at our local art store this past week. The image of the woman was purchased at Collage Stuff, and the text came from a clothing catalog that was delivered to our house a few years ago. 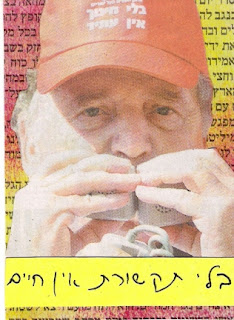 This ATC and the one that follows were inspired by the teachers' strike here, which has been going on for weeks now. This man is the head of the teachers' union that is out on strike. He is a real publicity hound, and I believe one of the reasons the strike has yet to be settled is that he likes being in the limelight too much. The words on his hat say, "Without education, there is no future." I asked Liat to write out the caption for me. It says, "Without the media, there is no life." The background and photo came from yesterday's newspaper. 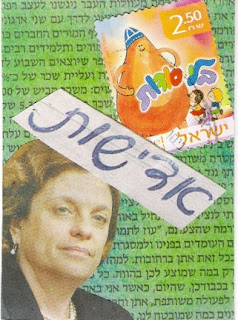 This woman is the Minister of Education in Israel. The postage stamp features a popular character from a series of books used to teach children to read here in Israel. The word in the middle says "Indifference." Again, the background, the word and the photo of the woman come from yesterday's paper.

In addition to all of these ATCs, I also got back to work on a project from a month or so ago, and started another project. And, I started the heel flap on the first sock for Meital. All in all, a productive day!

I always enjoy seeing your cards and you are inspiring me to pull out my stamping supplies. I especially like the way you tell us about the evolvement of the card. Hmmm....I can post from work but not from home.

Owh wow, tis your card that is featuring on the homepage with this months theme! :) Gratzz!!

I love your cards with text backgrounds. Are they for a swap too?