No Manner of Luck 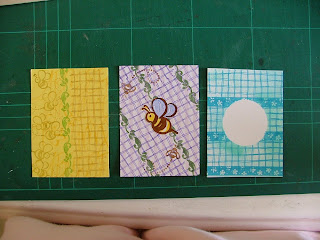 Here in a grim little row are my first three (failed, needless to say) attempts at a bug-themed ATC (Artist Trading Card) for the upcoming Club Posh swap. Clearly, some were never even finished. My friend Debbie says that we are our own worst critics, but even a five year old wearing rose colored glasses would be hard-pressed to find something positive to say about these three disasters. I call them "Feh," "Phooey," and "Yuck." 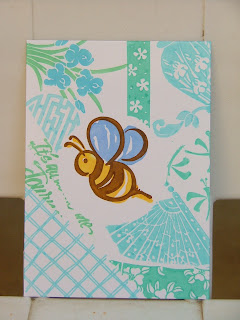 Not that the latest attempt meets my expectations, either. But it is more in the direction I've decided to go, in a sort of rubber-stamping-meets-crazy-quilt sort of way. Every time I look at it, I toggle back and forth between "okay" and "who are you kidding?" I'll leave it to you: should I submit this one for the swap, or should I write to Bev, the lovely swap hostess, and regretfully withdraw from the swap? I've been fussing (futzing?) with this for far too much time, and I am getting heartily sick of the whole thing, frankly. I've never had this happen with a trading card swap before.

To distract you from that, here are some shots taken in our back yard this morning: 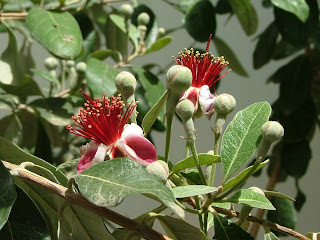 Our feijoa tree. I know, I've never heard of it either. Not only that, but I don't eat the fruit, don't even have the slightest desire to taste it. Neither does anyone else who lives in this house. But my MIL loves it, and the climate in Jerusalem is apparently all wrong for the feijoa tree. Looks like, if all goes well and the crick don't rise, we'll have a bumper crop for her come September. 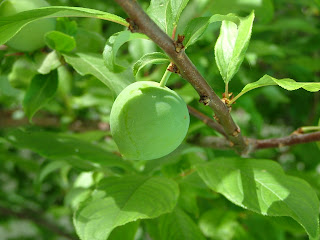 Neighbor Haim's plum tree looks to be in fine fettle this year, as well. We've a while to wait yet until we'll be enjoying some sun-ripened plums, but I can tell you from past experience they'll be worth the wait! We will give some back to Haim, naturally, even though these branches have grown over the fence that separates our yards. After all, how else can he make us some of his delicious plum preserves?

Yesterday, we had a lovely time celebrating Passover with Avi's family. And I finished the first Cascading Leaves sock for my sister, and started the second. Good stuff, as my friend Anne would say.
Posted by AmyS at Sunday, April 20, 2008

You've stumped me! But if I had to guess, knowing you, I'd guess one or another of the Pirates movies! :)

Ooh... Plum jam made with the skins comes out like sour cherry, just exquisite. Our next-door neighbors have a plum tree. It seems to bear lots of fruit every other year.