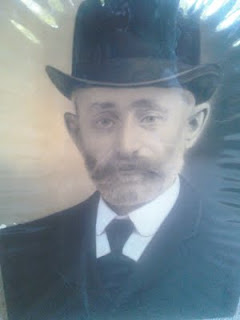 Does anyone remember this old John Prine song? The lyrics always make me cry. Anyway, for the last year and several months, my father and I have been on a mission to try and discover the identities of a group people whose pictures we have. My dad found them years ago in his aunt's apartment, when he cleared it out after she died. He had no idea who the people were, and it has haunted both of us. Those eyes just seemed to plead: "Don't forget us. Don't let us be lost forever." 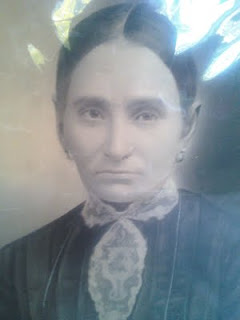 Today, thanks to Facebook and the marvels of the Internet, I have learned the identities of the two people shown here. They are my great great grandparents, Ida and Joseph Joseph. Learning that has been like a gift for me, and I am eagerly awaiting my father's response to the e-mail I sent telling him what I learned, and how I learned it.

I had always felt that the only way we would ever discover the identities of the people in the pictures was if someone had seen the pictures before. As it turns out, the woman who contacted me yesterday has paintings of these exact pictures (ours look like drawings to me), and she knew who they were! I am more grateful than I can say that she took the time to write to me after reading something I had posted on a Facebook group.

Amy,You are the best daughter a father could have...How sweet of you to help your father know his grandparents as well.
you are a beautiful person: of this I am sure.
Yes old people get very lonesome. Your poem is so right.I know now that my dear companion has been gone for 25 months .. I bet the poem was written by an older person too.
Elsie <><

How fatastic to have the photos and be able to find out information on the relatives.

I love it when you post about long past relatives. It's so interesting.

How wonderful that you found out! That sense of connection to those who've gone on before is a very powerful thing.

How lovely! It is so amazing that you were able to find out the identities of your relatives. I had not heard the song before, but the message is powerful. Also, you are so right about the eyes on these photos. They will not be forgotten now that you have taken the time to do the research. I'm happy for you and your father. So glad he saved those pictures!

I am so happy for you!! I love gazing at their countenances...