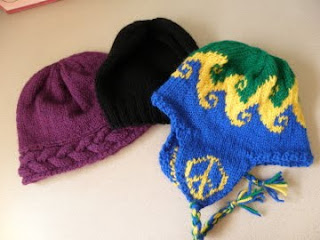 As promised (or threatened?) here is a photo of my three most recent hats. Bet you can't guess which one is for a guy.

The black hat is, of course, a London Beanie. The colorful hat is Swell, a pattern which can be found on Knitty, though if you are thinking of knitting this fun hat, I strongly urge you to use larger needles than called for in the pattern. I used size 8, with size 9s for the colorwork. And of course the purple hat should look at least vaguely familiar; this is the fourth time I've made this Coronet pattern from Knitty! And the second in about a week.

You may recall my mentioning that originally, I had planned to make a Coronet hat for myself, then ended up making one for my niece, one for Liat, and now two for Liat's friends. Well, I am heartily sick of this pattern at the moment, and I also just happened to notice a pattern I had saved (not sure where I found it, but it's on Ravelry) called Claudia, by M.J. Kim. I decided that before I start the hats for my nephews, I would finally, finally, make a hat for myself. I cast on in royal blue, and am really enjoying the pattern so far.

And it's a jolly good thing hats are so small and quick to knit.

In other news, Liat leaves for Poland in approximately 50 hours.
Posted by AmyS at Sunday, October 04, 2009

The hats look very nice. The cable one was selling at the fiber festival yesterday for $45.

It is beautiful enough to sell for that much! Aren't you glad you can make it yourself and not have to pay that! Although, it would be nice to make one and GET that much!

Yay! Hats!
They all look wonderful - you're so talented :D I really like the colors you did the Swell hat in.
Now I get to look forward to seeing yours!

What great hats! All so different -- a great variety!

I love all your hats but the Swell hat is adorable!

I love them all! What a wonderful mom you are.

Safe Travels to Liat and her friends!

I was about to remark that Coronet and Claudia are two of my favourite hats patterns but it isn't the same Claudia :0)