Goin' (Back) to Indiana 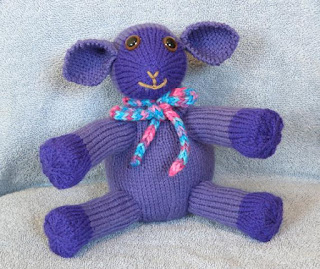 We'll see who catches the reference - if you do, I'll know you're a contemporary of mine, lol!  Anyway, little Lulu La Lamb here (design by the talented and creative bj from nv) is even now winging her way (well, she's actually still in the post office at this exact moment...) to BeLinda and CeeCee of Elephants Remember Joplin.

About a week and a half ago, as I was sitting at the basketball arena waiting for the start of the semifinal games for the Israeli championship, I got a Facebook message from BeLinda.  I am very happy to have contributed to Elephants Remember Joplin in the past (see here and here), and I was honored that BeLinda was writing to ask if I could help out again, this time with a special project - her daughter CeeCee is collecting toys for the children of  Henryville, Indiana who went through the tornado there.  The thing was, they needed the toys before the end of June.

Luckily for me, I had started this cute litle lamb months (and months) ago, with no particular recipient in mind.  As you know, I do that from time to time - you just never know when you're going to need a lavender and purple lamb, after all!  All I needed to do was finish up the body and knit the legs, ears and tail, which would have taken much less time than they ended up taking but for the fact that I was being lazy (shhh!).  I didn't have enough left of the colorful yarn to make the little keyhole scarf called for in the pattern, so I just knit an I-cord until I ran out of yarn and tied it into a bow.

So that's two knitting projects finished so far in June, and the pleasure of being able to help out in something wonderful.  Pretty good deal.

Yet again a adorable project!

Yea! Two projects completed in June and this is only June 4th. The lamb is adorable. I can see some child cuddling up to it at night! :>)

Hooray! Another charity project for such a good cause. I love how your map is filling up.

Pls watch out for my Thursday post ;O); Sunshine is coming your way.

I am definitely a contemporary. This little guy is too cute.