"You're never too old to do goofy stuff." ~Ward Cleaver﻿ 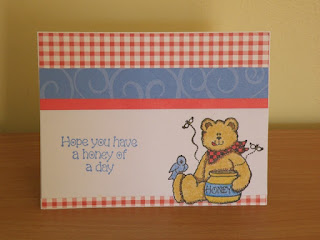 Yesterday afternoon I finished up two birthday cards, one for a friend of Meital's and one for my mother.  I also made this card, which was originally going to be a red, white, and blue card for this week's challenge over on the Penny Black challenge blog.  But this little bear (by Darcie's Country Folk) insisted he really needed to be on the card, and I have to admit I'm happy I listened to him.  Love the way this turned out (plus, more scraps used up, yay me). 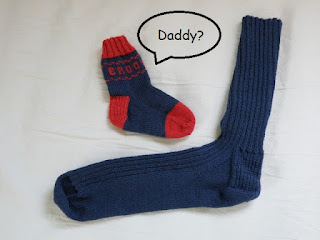 And speaking of goofy stuff, I couldn't resist setting up this photo.   It nearly took me a week, but I finished the first tiny sock of four that I'm planning to make.  As I mentioned in an earlier post, the guy whose navy blue sock that is in the photo above has twin boys, so they are getting socks with their names on them.  After making two pairs of size 13 socks in recent months, these toddler-sized socks feel ridiculously small.  But boy, are they cute!
Posted by AmyS at Monday, June 11, 2012

Love the socks especially the fact that you put the baby names on theirs. Special!!!