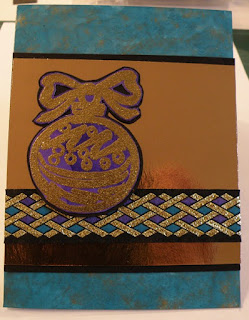 A very Merry Christmas to you! As promised, here are the other cards I made this year. Hopefully these blog posts will help me avoid repeating myself next year!

The first card is one I made at Liat's request; she wanted to give a card to the couple for whom she babysits. Since I had enough of everything, I made two of these cards, and the second one went off to California to a friend of mine. The ornament stamp is part of a Duet by Posh Impressions. I used alcohol inks for the teal background and the purple for the ornament. The ribbon is something I bought in 1995 I believe, when I was shopping for things to use on a Purim costume for Liat. It wasn't what I needed (I made her a Little Red Riding Hood costume) but I thought it was too pretty not to buy. So you see, I sometimes do use those things I hoard for years and years! 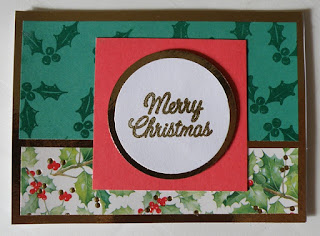 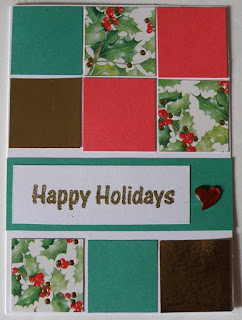 These two cards were created to feature that pretty paper with the holly, which actually was a border around a Christmas card I received many years ago and - don't be shocked - couldn't part with. I think is so pretty. The holly stamp used on the green cardstock in the first card is by Posh Impressions, the script Merry Christmas is by Art Impressions and the Happy Holidays is from Darcie's. 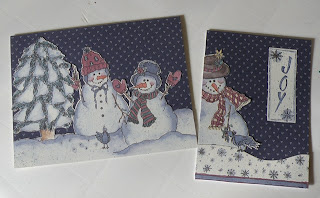 One more story of hoarding. These adorable snowmen were all at the bottom of a piece of stationery (or scrapbook paper) by Keeping Memories Alive that I have hung onto for many years. Couldn't figure out what to do with it, but it was too cute to toss in the recycling. The stationery had a border of that snowy paper you see in the card on the right. I trimmed them out, and since the snowman on the right was behind the one with his hands up, I had to trim away the left side in order to make him look normal. The Joy stamp is by Posh Impressions.

I know I (and probably everyone else) always say it, but I really do hope to get an earlier start on Christmas cards next year. There were so many people I wanted to send cards to, and I just ran out of time. I actually know people who make a few every month and by the time December comes around they are pretty much all set. I can't decide if I think that is wonderfully admirable or irritatingly efficient!

I am just about done showing photos of things I have done lately, so I'd better get busy making and doing new things to share.
Posted by AmyS at Tuesday, December 25, 2012

A handmade card is such a great gift. Hope your Christmas was all kinds of lovely.