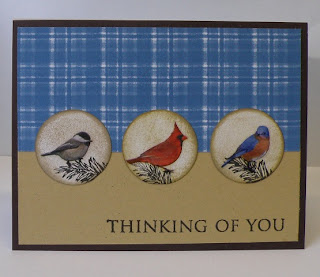 This blue plaid paper was actually already in the recycling box, but I rescued it yesterday (and its twin) and made two of these cards. The paper is by Keeping Memories Alive, the bird stickers are by Paper House Productions, the pine bough (just a teeny piece of a larger stamp) is by PSX, and the sentiment is Hero Arts. I used the Operation Write Home sketch #151. The circles were colored a bit with Distress Inks in the Frayed Burlap color. One card will go to OWH, and the other will go to a cousin of mine. 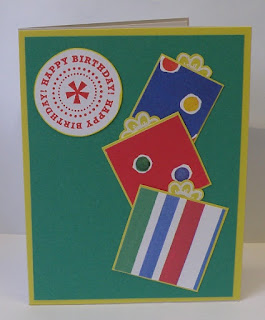 I copied this idea from a card I saw on Pinterest. It is very similar to a card design on OWH, not a challenge sketch I don't think, but an idea for using up scraps from the tutorial about Scrap Wrangling. Aside from the paper scraps, I used the leftover smiley flowers I used in a card a few days ago for the "bows" on the presents. Now that I get a good look at this card, I see I need to touch up the yellow ink around the sentiment before this goes in the OWH box. 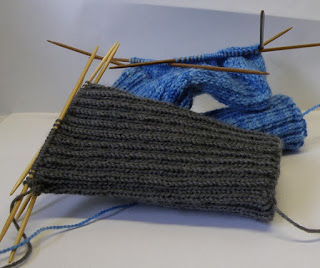 And just in case my knitting friends were thinking I had abandoned my needles, I present two of my socks-in-progress. The blue one is the second of a pair for Meital, the grey is for someone very special.

I keep getting more and more inquiries about doing work for the Yizkor Book project. I have mentioned these before but it was a while ago. After the Holocaust, many of the survivors moved to Israel or America and began recording the story of their hometowns and the people in them. There is often a good deal of pre-WWII history in these books, along with accounts of the suffering endured by the townspeople during the Holocaust. There are descriptions of the town itself and of various events that took place there, character sketches of various people from the town, and so on. These are truly memorial books for places and people who are no more. Sometimes the chapters are full of funny stories, sometimes they are horrifying and tragic, and sometimes they are poetic. The Hebrew is almost always very elegant and lyrical, full of old fashioned terms and references from the Bible. Interesting and challenging work to be sure.

So I'm pretty busy on what is likely a four day weekend for most of you. I hope you're having fun!
Posted by AmyS at Sunday, December 30, 2012

Will you contribute a story to the Yizkor Book or help translate? What a terrific project. I saw Schindler's List and visited the Museum of Tolerance. What two, powerful things to experience! Also Disney had this great Disney movie called Full-Court Miracle where I learned about Judah Macabee. And now I'm mid-way in Alice Hoffman's The Dove Keepers about the Jewish resistance to the Romans at Masada. It's spell-binding.
The birthday card is bright and fun. And hooray! You're working with fiber again.