Again with the Slippers 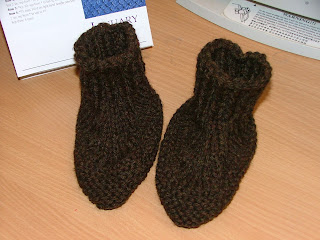 There's just no way to make dark brown slippers look good, unless there's lots of natural light. It was about 5:30 p.m. when I took this picture, ergo no natural light. But the good news is, I finished the skein of Wool-Ease Chunky! Destashing, and no more dark brown slippers to drive you into a boredom-enduced stupor. This pattern is one I found at Knit Addicted. It's called the Bulky Yarn Booty. It's a very easy pattern and works up super-quickly (obviously!). Of course you know I already cast on for another pair of slippers, using yet another pattern. I want to try a bunch of different patterns, then go back to the one I decide is my favorite.

I also finished up the first sock for my mother-in-law, and started the second. I even managed to work on my blue and yellow sweater, which I am contemplating demoting to vest status. There are a couple of reasons. The pattern calls for a rather large armscye (that's an armhole to us normal folk), but if I reduce the size of the armscye, I have no idea (and am not sure I want to have one) how to adjust the sleeve cap accordingly to ensure a proper fit. That's the first reason. Actually, we could in all honesty call it the only reason. The second reason, which is really more along the lines of a justification, is that I am making this sweater for wearing to basketball games. It is rather unlikely that I will wear it anywhere else (though as those of you who know me realize, anything is possible). Inside the basketball stadium it is rather warm, especially if you are a true fan who jumps up and down, screams, whistles, insults the referees and otherwise works up a light "glow". A vest would, in all truth, be much more practical, not to mention comfortable. I won't even go into the fact that I can finish a vest up right quick, whereas the doldrums known as "sleeve island" have been known to swallow up enormous gobs of time, leading to the unthinkable possibility that my team sweater wouldn't be ready to wear before the weather heats up. I'm about 99% decided to go with the vest idea.

Since we just purchased the Pirates 3 DVD (insert happy dance), I feel completely justified in asking, "What say you to that?"
Posted by AmyS at Monday, January 07, 2008

I love the slippers! I might just have to do some of them. I know so well about sleeve island. I have three sweaters without sleeves and they all will have them. I'm knitting as fast as I can!!

They look great. I finished up my socks last night and need to CO another pair. Are you going to do Ann's KAL on Sheep Shots? Thought I might.