Doing What I Can 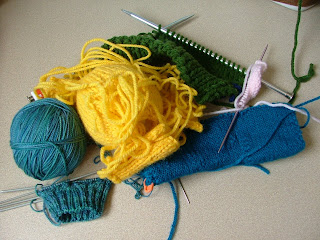 This messy little pile contains my current projects as of this morning. We've got the second Cascading Leaves sock, the second mitten of the second pair of mittnz for the Native American Support challenge, and a couple of other things. Two things in the pile are now finished. 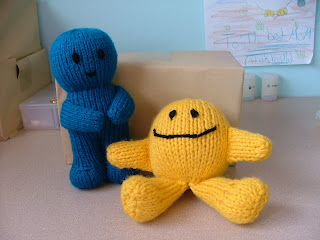 The yellow toy (I call him Mr. Smiley) was made based on the pattern for the snowball toys in Jean Greenhowe's booklet, Toy Collection. Not long ago, my friend Miriam put out the word at Club Posh, asking folks to pray and perhaps make cards for Lindsay. Once I'd read the blog, I couldn't get little Lindsay and her big brother Tanner out of my mind. I started making Mr. Smiley for Tanner, who is three and must be feeling awfully bewildered about everything that is going on in his life right now. A toy for Lindsay is currently on the needles, though I have no idea if she'll be able to actually touch it (infection is to be guarded against at all costs, especially now). I will also be making cards for each of the children.

The blue toy (trust me, he's a deep turquoise blue) is the Jelly Baby by Jean Greenhowe that I promised to Meital. It was very important to me to finish it as quickly as possible, so that she wouldn't associate my doing for others as a cause for sacrifice on her part. She is happy and proud of me that I am making gifts for these children (and has even given me some pink yarn from her stash to make a bunny for Lindsay), but after all, she's ten. Meital still loves her soft toys and wants as many as I can make her. I hope she never has cause to feel I've disappointed her.

As for the bunny for little Lindsay, I've done a bit on it and will work on it more this evening. Avi and I have been invited over to the home of our oldest and dearest friends here in the neighborhood. Their names are Shy (it means "gift" in Hebrew) and Noa, and their son Kfir has been Liat's classmate every step of the way, from age three (preschool) until now (tenth grade). We have been through a lot together, and these days we don't see them nearly as much as we'd like. So, we'll head over there tonight for some cake and coffee, and I will bring my knitting because Noa doesn't mind (those of you who knit and are friends with non-knitters will understand).
Posted by AmyS at Wednesday, April 23, 2008

I like all the little characters but I especially like Mr. Smiley! Those children will be delighted with your thoughtfullness.

What a beautiful person you are to do such a thing for two little kids you'll likely never meet! You have no idea the impact your kindness will have on the hearts and minds of Lindsay's family. Thank you so much for caring and for acting on it. May God continue to bless you and your family. - Jenny (Tanner & Lindsay's Aunt)

Uh oh. blogger won't let me leave a post. Hmmmm. Anyway, these are wonderful. Mr. Smiley makes me smile. The children are so lucky to have you make these for them.

Dear Amy:
Thank you for your blog comments about my grandson and granddaughter, Tanner and Lindsay.

We are all curious how you found out about their story and who Miriam is?

Your kindess touched our hearts. Please write to be at bwelte@americaskeswick.org.