Forgot to Show You 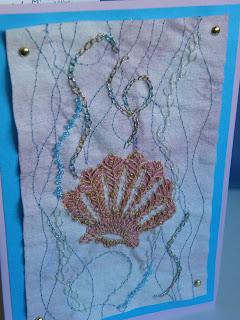 I completely forgot to show you the card I made for Liat that was given to her during her trip in Poland. Her English teacher had called and asked parents to write a letter that could be given to the student at some point during the trip. Well, of course I don't just write plain old letters!

You won't be surprised to know that my favorite thing about this card is that it all started with a used "color catcher" - those sheets you put in the laundry so your dark colors don't bleed into the lights. I used one of those foam craft stamps (you can find them just about anywhere) and some pigment ink to stamp the shell. I used my sewing machine to stitch some of the lines above and below the shell, then embroidered and added beads according to my whim. It was fun to just forge ahead with no set plan and see how the project developed. Unfortunately, the photo doesn't show you all the sparkly threads and pretty beads I used, but at least you get an idea.

I have started the hat for my other nephew in Jerusalem, and bought the yarn to make his sister's scarf. Now I just need to settle on a pattern to use. She wants black and turquoise, so at first I thought about double knitting, but with the scarf for another of my niece's being a double knitting project, I decided maybe that wouldn't be a good plan. Now I'm thinking about using a multidirectional pattern and alternating between the two colors. We'll see!

Mark at Stamp A Mania told me that he will soon be sending out the kits for the design team members. I'm more than a little excited! I made two more cards today and have started a third. What I really ought to do is make two of each, so that I have one I can send to a friend or family member. I think I'll do that with the next card I start.
Posted by AmyS at Wednesday, October 21, 2009

I bet Liat felt very special when she received your card.You are such a good mom!!

Wow, How wonderful that you put so much thought and time into Liat's card. It shows her that you care and hopefully she got to show it off to her friends. No quickie hand-written note, but a thoughtful artsy card to remind her of you.