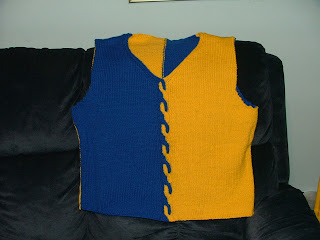 Okay, that's not a real word. But you knew that, didn't you?

I actually managed to get my vest finished, and wore it to the game tonight. Avi was very proud of me, and bragged to the man sitting behind him about it. This is the same man who commented a few weeks ago about my knitting socks during halftime. He'd said that it had been years (a hundred at least) since he'd seen anyone knitting. He seemed very pleased to know that I was carrying on the tradition. A charming gentleman.

This vest has a complex and murky background. Basically, I got the idea for it from a sweater I saw in an old Knit 'n Style magazine. Their version was in pale yellow and pale lavender, done in garter stitch with the two-color cable up the front. After learning from some knowledgeable knitting friends that garter stitch can get very stretched out and unappealing, I opted for stockinette. I put two purls on either side of the 6 stitch cable. I changed the colors, obviously, and didn't make the sleeves. In the end, I followed the basic sweater pattern in Ann Budd's book, The Knitters Handy Book of Patterns, and just used the two color and center cable idea from the magazine. The sweater was very easy to knit, except for the cable. Every time the colors switched over so that the yellow cable was on the blue background, and vice versa, I had to carry the yarn across in floats, as you do with colorwork or fair isle knitting. Not difficult so much as a bit fiddly. The sewing up made me miserable, of course. I think tomorrow I'll cast on for a top-down, knit in the round raglan pattern from Knitting Pure & Simple. I could really go for knitting more seamless items.

Naturally, I still need to finish up the second colorful "Ann" slipper, the TSGFSVS, and of course my current sock, the Waffle Weave Sock pattern from Knoxsocks Designs.

I even made time today to translate another article, do my weekly volunteer gig at the community center, and make these: 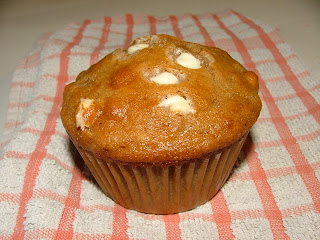 These are One Bowl Cheerios Muffins. I didn't have enough plain yogurt, so I made up the difference with some capuccino yogurt I had on hand. I also didn't have cinnamon chips, so I fell back on Old Reliable: White Chocolate Chips. These are very tasty, but came out rather moister than I am used to in a muffin. Unless someone in my family tells me they adore them, I may not make them again for awhile. Unless, of course, I try a few substitutions...

sounds like a great day -- love the calbled fornt for your vest. Work gets in the way of what I need od do (knit) lol!

Great job on the vest! I love the way the two colors make the cable pop.

Shucks, I thought for sure I was going to finally get a glimpse of you modeling the vest! I too love the way the two colors make the cable really pop! Great job, I'm not surprised that Avi is so proud of you, and if you didn't get a lot of compliments at the game you should have! It's awesome.

Amy, it's gorgeous. Was it hard? So cool Avi brags about you!

Love the vest. The colors bring back warm memories of my high school days!