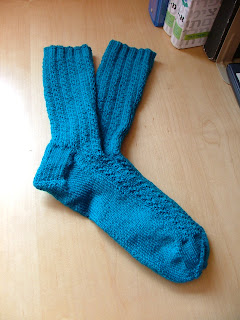 Here, at last, are the %#@$ Conwy socks, from the book Knitting on the Road. Let me start out by saying that I'm mostly happy with the way they look, especially that gorgeous color! Yarn is Cherry Tree Hill, which I used to hate but don't anymore.

Okay, what was my problem with these socks? Why did I complain about them so much? First of all, I really hated the "knit into second st, knit first st, slip both sts off needle." It's fiddly, it's fussy, and each time I came to one of these jobbies (12 times every fourth round, thankyouverymuch), I had to try, try again, and try another two or four times before I could perform this maneuver without splitting the yarn. Then, two rounds later, I had to "knit into second st through the back loop, knit first st, slip both sts off needle" another twelve friggin' times, every fourth round. Same deal, try, then try again, to do it right without splitting the yarn. It would take me approximately ten minutes to do each of those two rounds.

There are 80 rounds in the legs of these socks. Just sayin'. 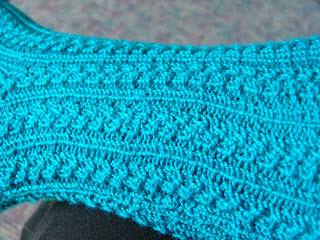 Then, of course, like a good little lemming, instead of freeing myself from the torture that was this pattern, I followed the instructions to carry the pattern down the instep. What a fool.

But, then we come to the stupidest part of this pattern. The ugliest toe I have ever seen. This toe is shaped like the top of a hat, with four evenly spaced decreases instead of paired decreases like most normal socks have. (Sorry, I'm just a wee little bit biased, here. If you think this toe is the bug's ear, or the best thing since sliced bread, I apologize.) 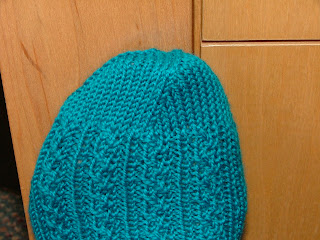 So there you have it, all the things I despised, loathed and abhorred about these infernal socks. I don't think the way they turned out is really worth all the suffering, but I may change my mind with the passage of time. They're nice, but not as WOW as I'd thought they'd be, and certainly not worth all the hassle of knitting them.

Oh, and I wanted to show you what greeted me when I went back upstairs to my computer last night after my superb birthday dinner (grilled steak in a wine sauce, home made steak fries, and salad, for those who asked). 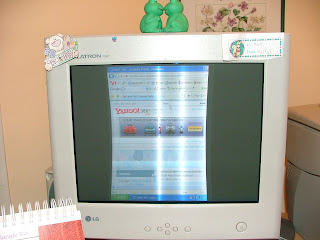 Not exactly the high note on which I'd hoped to end my b-day. At first we thought it was the card for the monitor, so Avi replaced it. Turns out, I need a new monitor.
Posted by AmyS at Tuesday, September 25, 2007

The socks are gorgeous. I love the pattern and also the color. Who are these for? Have I forgotten? I agree that I don't care for the toe decreases. Great job!!!!

It's too bad the socks gave you such grief, but they turned out quite lovely! Happy Birthday...glad you had a pleasant day. Well, minus the monitor catastrophe, anyway. ;-)

Wow, I love them!!! Great color, great job and while the toe is interesting looking, there must have been a reason to have done it? Learning? Great pictures of it and congratulations on the replacement monitor. That is supposed to use less energy too from what I hear.