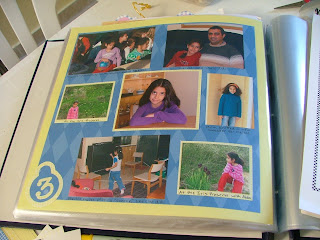 Usually my hobbies are pretty mainstream; the kind of acceptable, sometimes even trendy, pasttimes enjoyed by thousands, if not millions, of people around the world. Take scrapbooking. I did this even as a kid, back in the 1970s. I discovered "modern" scrapbooking, with all of its acid- and lignin-free, lightfast and fadeproof supplies, and had a great time putting together album after album of adorable layouts of my kids. Then suddenly, somehow, scrapping went from popular to Ultra-In, and I lost interest. I have fallen years behind in the scrapbooks I started keeping for my girls, and the guilt was gnawing away at me. This week, I finally cleared off my messy stamping/art table and got out my scrapping supplies. This is Meital's album. As you can see, I am working on her third grade year. She will be finishing up fifth grade in about a month. (Liat's book is even farther behind. Don't ask). 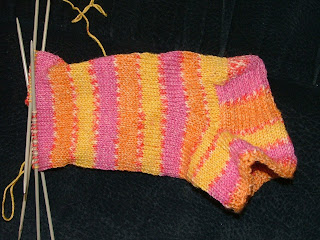 Then there's knitting. Knitting is a warm, fuzzy hobby that some enlightened folk out there are beginning to realize is not restricted to doting grandmas. It's about as normal a hobby as anyone could have (Well, we won't talk about the folks who knit sweaters for trees and park benches, or capes for statues of Revolutionary War heroes. May the Force be with them; because I won't). This, by the way, is the first cotton ankle sock for Liat, done in Sockotta.

Every once in a while, though, I get a wild hair. After all, doesn't everyone? I suddenly decide to try something that is, for me, a complete departure from my usual creative efforts. This morning I started thinking of the box of rather disreputable toys Meital has given me permission to discard. Originally, the plan was to donate them to the community center. But I've put it off for many months, because frankly, I don't feel right about giving away dolls that are in such poor condition. So... 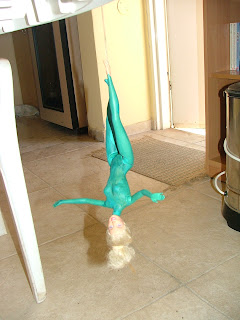 Yep. I'm altering a Barbie. Even my normally-unflappable Liat looked askance at this latest scheme. Barbie is hanging like that because it was the only way I could think of to let the paint dry without any smearing or smudges (though I suppose those could have been rather intriguing design features, now that I think about it...). This particular Barbie had frizzy, uncontrollable hair, chewed hands, and twisted ankles. We'll see what a little paint and a few other things can do for her.
Posted by AmyS at Monday, May 26, 2008

Be afraid, Barbie, be VERY afraid.

You just amaze me...I hope you blog regularly on the transformation of Barbie.

Have you done altered books? That intrigues me!

Yes, I also want to see the transformed Barbie. You are so sweet to spruce her up for some other lucky little child.