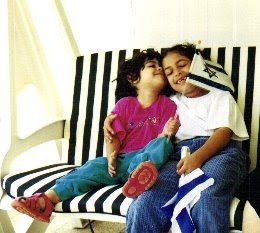 This photo of my girls was taken nine years ago. It's one of my all-time favorites, so I am posting it today. It is also the photo that accompanies my article about Independence Day on my website about life in Israel.

As for today's Independence Day, I've spent most of it napping, trying to escape from yet another nasty headache. It's now after 7 p.m. and I'm starting to feel better. Avi and Meital are off to a basketball game (even though the Euroleague season is over, there is still the Israeli league to finish up). Liat and I will hang loose at home, and watch the game on television. 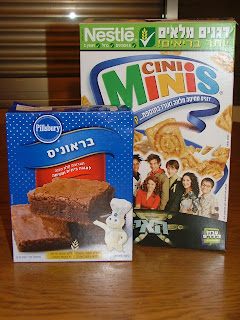 Last night I decided to try out another recipe. This one is called Mexican Chocolate Crunch Brownies and is a Pillsbury Bake-Off entry from 2008. These sorts of recipes tend to rely heavily on brand name products with, naturally, the name being Pillsbury (or as Israelis say for some reason: Fillsbury). We didn't have the proper brand name breakfast cereal, but wonder of wonders, our local supermarket had the exact brownie mix! 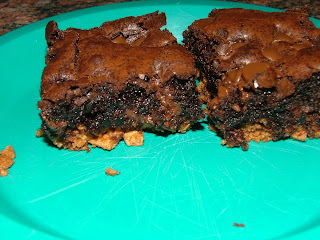 These look lucious and inviting, but unfortunately, they do not live up to their promise. We were all disappointed by the taste of these brownies. The cereal crust was too crunchy and stuck to our teeth, and brownie mix just doesn't compare to home-made. I do think the idea is a good one, and it could be that with some tweaking this could be very yummy. But as for this batch, much of it will be off to school in the morning, to be distributed to hungry and unsuspecting children. Bwah-hahahaha!

Bobbi asked about the surprise gift for a friend. I am happy to report that said gift is finished, wrapped and ready to go to the post office tomorrow to begin its journey to.... oops! That would be telling, now wouldn't it? Once the gift has been received, I will share a photo. 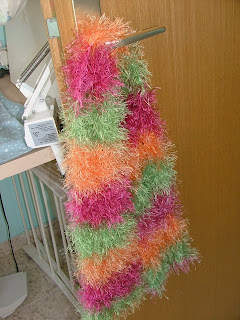 I also made this easy-peasy garter stitch scarf over the last two days. The yarn, Lion Brand Fun Fur, was a gift from my wonderful and generous friend Lorraine. It was actually a gift to Liat, but while she knows how to knit, Liat doesn't enjoy it. She offered the yarn to me, and she is very happy with what I've decided to do with it. This scarf is going to be a gift for the sister of a friend of mine.

I have also been working on my sister's second Cascading Leaves sock. I'm about one round away from starting the heel flap. And I'm nearly done with the second wristwarmer of a pair, for the Mittnz 2008 challenge. 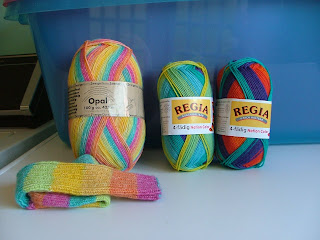 And finally, I have just about made my decision as two which of these rainbow striping yarns I will use to make socks for my niece (I included a sock I made for Meital awhile ago with the same Opal yarn. The two skeins of Regia are indeed the same colorway, just showing different colors). She wants knee socks, and the pattern I think looks the best calls for the socks to be knitted from the toe up. I have never tried this before, and have gotten a lot of very helpful advice from many wonderful knitting folks about how I can accomplish this feat (feet?) of engineering. Knowing me, it would be better if I wait to finish my sister's sock before starting to play with these, because I have a feeling once I start the knee socks, I won't get much else done, at least until I feel comfortable with what I'm doing. But it's hard to wait!

And that's about all that's new from here. I wonder what tomorrow will bring?
Posted by AmyS at Thursday, May 08, 2008

Love, love, love the picture of the girls. I can see why it is your favorite.
The brownies, well I was already to make them as the name sounded enticing but your review of the recipe has scared me away.

That Opal yarn is gorgeous. I'll have to check out what else they have. They were suppose to come out with Harry Potter Opal yarn...a little late, don't you think!

That photo of your girls is darling! Love the sock yarn -- tough choices, but both are lovely!

You know which color I am choosing, right? That brownie mix/cereal thing didn't sound great to me, but then I am way, way older than your daughters who probably like sweets. Believe it or not, lots of us lose our tastes for chocolate or sweets as we grow older !!!!! but now that I have high blood pressure, can't keep spicy pickled things in the fridge; I gobble them as fast as I open them. Weird body changes.

Thanks for the info on Memorial Day and Independence Day. I love the silent memorial time. Yes, we are very commercial here in the states, and the significance of the holidays are sometimes lost.

Sorry the brownies didn't turn out like you wanted, but the scarf did. I love the picture of your children. They look so happy. I enjoy reading your blog.