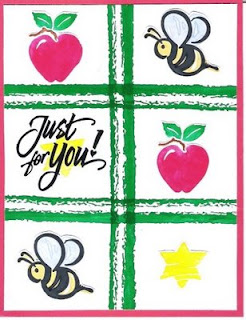 Thank goodness for the wonderful people at Club Posh! If not for them, I never would have learned that a card I submitted to a stamping magazine has been published. Above is the scan I made of the card before I sent it out to Just Cards, a magazine I don't get and have never seen. 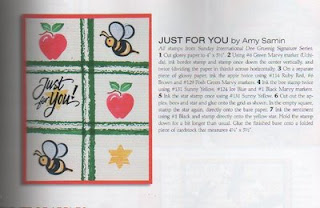 Thanks to my friends, I have now seen this page (33, if you want to look for it) in volume 11 of Just Cards. The funny thing is, my card is apparently in the Everyday Cards section of the journal, while it was intended to be a card for the Jewish New Year (Rosh Hashana). No matter, I am very happy to know it was published.

I haven't knit much today, but I have done some creating in my stamping room, which is something I've been wanting to do for a while. Later on, I'll have some work to do, as Maccabi is playing a basketball game tonight. Sure hope I'll be writing about a victory, but we have an almost completely new team this season, not to mention an all-new coaching staff and team manager. They've been playing well, and I suspect in a few more weeks they will really have pulled together.
Posted by AmyS at Saturday, September 27, 2008

Congrats, Congrats! How wonderful that you sent your cards in. It feels good to be recognized. I am proud that you felt good enough about your artwork to send it in for publication. Very nice card!