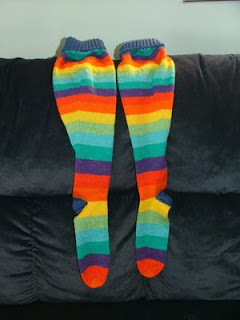 Oh, yeah. I am SO happy to be finished with these knee socks for my niece! They really are the same length, they just don't look that way in this photo. 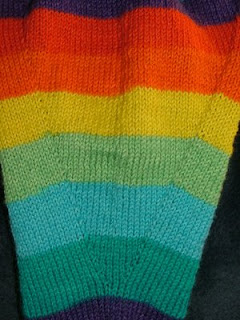 Here is a close up of the increases for the calf. Quite a long time ago I posted about how ugly my increases were turning out, and how I ripped back and started them again. I am so glad I did.

Interesting facts about these socks (well, they're interesting to me, anyway!):

Now, if that's not pathetic, I don't know what is. I had the first sock on the needles for 16 and a half weeks. Once I had finally figured out all the math and realized I didn't need to fear the sock, I was able to start and complete the second sock in 2 and a half weeks!

Once I had finished the socks, I took the photos then ran through the house, waving them in the air and shouting, "They're done! They're done!" If you don't believe me, ask Avi's friend in Sweden, with whom he was chatting (and using his webcam) when I rushed into the room.

Then, do you know what I did?

Yep. I cast on for a new pair of socks! For me this time, cuff down and fairly standard, except they call for stranded color work, which should be fun and only mildly challenging (remember the Doll Bag?).

Then later on, I did something I've never done in the 2+ years I've been knitting socks. I cast on for a different pair of socks. Plain 2 x 2 ribbing. For Avi, for Chanukah. He will see me working on my socks, and I will only work on his when I know he won't see them. So I've got stealth knitting and camouflage knitting going on at the same time.

Amy, your niece will be the envy of all her friends. They are wonderful, fun, interesting and more. Didn't take you long to make the second sock!

Now those are going to be happy feet! Those socks are so cheerful--congratulations on finishing them!

Yay! I am doing the happy dance with you. I love that you persevered and have 2 finished socks. These would have gone into my pile of unfinished projects. Your niece is going to have the coolest socks on the block.

Yay! Congrats on your finish - those are some really cool socks!!!