Last in the Series 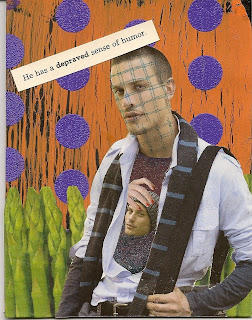 This is the fourth and last Halloween card in this series. The male model is from the same catalog as the woman in the three previous cards. The asparagus came from a circular from a grocery store. I had a couple of other, similar things at the half-way stage, but my enthusiasm has waned. I want to try taking the next set of cards in a different direction. So today I cleared off my stamping table and am set to begin again tomorrow.

I've also been knitting on my niece's second knee sock, and am about 1/4 of the way done with the increases up the calf. Now that I've finished the first sock, this one seems a lot easier. What a relief!

Well, Maccabi lost their first home game of the season last night. They put up a good fight, and ended up losing in overtime. It was a thrilling game, and we were lucky enough to have been given two tickets to the game, which meant that all four of us attended a game for the first time. The girls sat in our regular season ticket holder seats, and Avi and I sat in the gift seats, which were located in the next section over. It meant we could actually see them and make eye contact during the game, which was great.

Next week, the four of us are going with a bunch of our friends (and their kids) to see the Harlem Globetrotters. I haven't seen them in years! I am so excited for the girls to see this slice of American culture.
Posted by AmyS at Sunday, October 05, 2008

The card is lovely and the male model is easy on the eyes... hehehe.

I've seen the Harlen Globetrotters and your daughters will certainly have a fun time! Can't wait to hear about it.

You look like you are having a great time with these cards, you are quite the recycler. I used to love the Harle Globetrotters. Your whole family is in for a bunch of laughs.