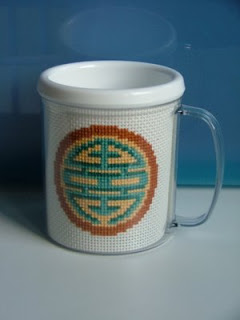 Hello everyone! Just crawling out of the bag of chocolates where I've been hiding to say, yes I'm still alive. Now that my niece has had her birthday (and has opened her gifts) I can finally reveal the things I made for her. Above is a fun gadget called a Stitch a Mug. The plastic mug and liner pop apart and you can add a decorated insert. It comes with a precut piece of plastic cross stitch canvas, which is what I used. I changed the colors in the design of an augury that I found in one of my many cross stitch booklets so that it would have teal, which is my niece's favorite color. Her initials are on the other side. 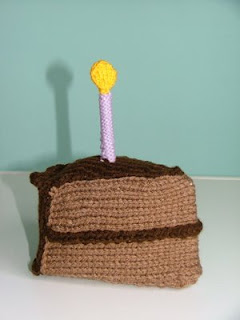 Then I decided that she also really, really needed a piece of birthday cake! This was quick and easy to knit up. The only change I made (if I remember correctly, since it's been a month!) is that instead of knitting a candle out of I-cord, I knit a thin strip and sewed it around a cut-down drinking straw (a la Jean Greenhowe, who is absolutely the cleverest toy knitter out there, as far as I know). 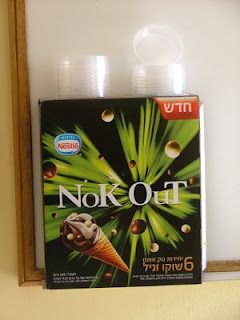 Another something I did a while ago was search out a way to reuse the clear plastic caps that come with the current favorite ice cream treat here at Bag of Chocolates. 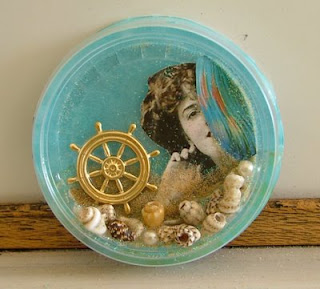 I came up with a sort of mini-shrine idea. I had seen something done with a tuna can at Ten Two Studios, and had - once upon a dream - saved a washed and scrubbed tuna can for transforming into a shrine. Never happened. I ended up tossing out the can. But for some reason this tiny little cap seemed to work for me. I also use some of these for paint palettes for those liquid acrylic craft paints, but I've already got a million things that work for those. In any event, I backed the cap with a circle of leftover painted and stamped cardstock that I'd saved for oh, about forever, from another project. Glued in the lovely lady (who was missing half of her face for some reason - she came that way) from Collage Stuff. Glued part of a fish tail from an advertising circular for a pet shop over the flat part of her face. Added sand from our local beach and shells that were originally on a necklace that no one ever wanted to wear. The little pearl-like beads were part of a piece of costume jewelry that (do you detect a theme here?) no one wanted to wear. The ship's wheel charm also came from Collage Stuff.

I have a feeling I could have a lot of fun with these, once I get back to them. Meanwhile, I've got a bunch of Halloween cards that really need to go in the mail, birthday cards to make, and a second something or other to come up with for my niece (she of the knee socks) for her upcoming birthday. I hope to have some finished things to show you soon: I have one sleeve left to knit on the baby cardigan, am sewing up the Jean Greenhowe puppy for Meital, and have some super-cool socks on the needles (for me!), as well as the 17.33 other projects in the works. Time to come out of hibernation and get busy!
Posted by AmyS at Tuesday, October 21, 2008

Your stitiching looks wonderful, though the cake made me a bit hungry... ^^
And I really like your little shrine - such a clever idea!

wow!! You are just SOOOO creative!!
And so talented!!

How lovely it all is! I've made the mugs, too. I made a sippy cup for baby shower for oldest granddaughter, too.

Love the cake! What a cute idea. May have to investigate those. Have friends that don't do sweets.

The little shrine reminds me of a stamper thing years ago. Can't remember what the official name was, but they were the cardboard caps used on glass bottles of milk. Nice cream colored little white circles (back before all these things were custom made for stampers and we scavenged for stampable things) to create little works of art.

They'd make really great holiday things to hang in groupings.... I'm thinking lots of bats, spiders and such for the current season!

I love the cup. I've made one before and it is so much fun.

The slice of cake!!! What a fantastic idea for long distance birthday folks!! ...and a keepsake as a bonus.

Love the bottle cap. You are the master of creativity and recycling.... one of the reasons I enjoy your blog so much!