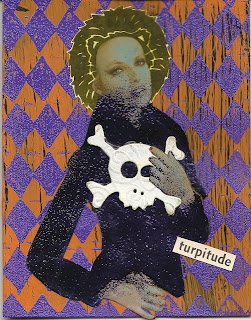 Only one card to show you today. This one uses the same basic black & orange background as the others, overstamped with a Harlequin pattern (stamp by Posh Impressions). The skull comes from Tim Holtz's grungeboard collection. To cover up the clothes the model was wearing, I colored them with a pigment ink pen, then embossed. The speckles of embossing powder on her face and hands were a mistake, but one I was quite pleased to see.

I started another card today, the final in the series, but didn't have time to finish it. I ended up working for most of the day, translating things for the new Maccabi Tel Aviv website. I doubt the work I did today will be there before tomorrow, but you never know.

Tomorrow night is the first game of the season! Actually, it's not a regular season game; it's a special game meant as an opportunity for Maccabi fans to say goodbye to a wonderful player who, after six seasons playing in Tel Aviv, has changed teams and is now with a Greek team called Olympiacos. We originally had only two tickets to the game (because we are season ticket holders) but thanks to my new position (!) we are supposed to have two additional (free) tickets waiting for us at the box office. Keep your fingers crossed!
Posted by AmyS at Friday, October 03, 2008

Card looks very nice! Amazing how "mistakes" can sometimes be really nice in the art world.

I think the color spreading was great!