What Month Is It? 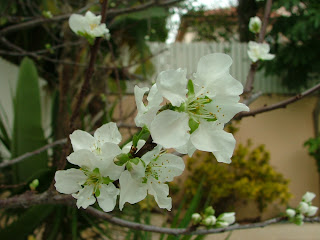 These blossoms are adorning several overhanging branches of our neighbor Haim's plum tree. The plums from Haim's tree are delicious and juicy; in fact, they are as sweet and tender as Haim himself. Normally, we see blossoms on the fruit trees a bit earlier in the year (believe it or not; I know some of you have lots of snow just now!). But we had a cold spell earlier that probably delayed the Spring bloom. 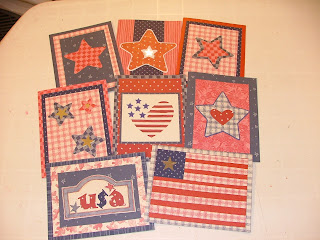 Here's another out-of-season occurence. Today I made a whole bunch of Fourth of July cards, for Keiki Cards. They are asking for Summer and Fourth of July cards, so I want to get these done soon and on their journey to Hawaii. I still have another 5 or 6 yet to finish before the package will go out. These are made by layering patterned paper, and using templates and some stickers. As you can see, I can get a whole lot more cards done this way than I can by stamping, which is why I like to use this method to make cards to send to Keiki. The photo is not the greatest because I took it tonight: no natural light. Plus I seem to have become an expert at taking a blurry photo while using the camera's auto-focus feature. Sigh...

Aside from that, I added a whole boatload (or so it seemed at the time) of beads to my cross stitching project, Mother's Arms. I worked on the second Waving Lace sock, and get a whole lot done on the earflap hat. I hope to have a photo of the finished hat tomorrow or the next day.

I tried to work on my project-with-a-deadline, but I broke my sewing machine! We're going to try to take it to be fixed, but it's over 10 years old. I have no idea if parts are still available, or how much we might be charged for labor. I'm fairly sure the problem is a fairly simple mechanical glitch, so we'll see. I can always sew this project by hand if need be. I've done it before. More on that in a future post.
Posted by AmyS at Sunday, March 09, 2008

I love your pictures of flowers. It gives me hopes of spring in very snowy, icy Vermont. The cards are beautiful!
Do you string the beads for the cross stitch ahead of time? It's a beautiful piece.

Owh Amy, thanks for the link to Keiki Cards! I had never heard from them, but very much like their initiative. Going to add some cards to my to-do list to send to them. Also, my grandmother used to make 3D cards and after she died we are left with quite a bunch of beautiful cards that we however aren't able to all send out ourselves heh. Going to tickle my mum about those as well.

How many months prior to the monthly "theme" do you send them in?