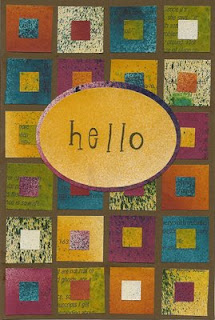 Here is a card I finished up and got out in the mail yesterday. I took inspiration from a project on the Ranger Ink website. I used my new Adirondack color wash sprays in Butterscotch, Cranberry and Stream. I used an old book (The Mystery Writer's Handbook, circa 1993) as my paper source. I also made a second card front that more closely follows the original project (black cardstock base, only 12 squares on the card front). There's a new project I want to try next, from Tim Holtz's (tm) blog (isn't that weird? He trademarked his name! He's a genius, though, so it's okay).

We got a lot of translating done today. By my estimate, we're more than halfway done with the 20 some-odd articles. Something interesting (but not surprising, really) we're learning is that the same story can be told with all sorts of variations. I wonder which one (if any) is the truth.

I am currently trying to find the record of my great-grandfather Joseph Colvin's arrival in the U.S. According to his U.S. Naturalization Record, he arrived in 1892. After searching fruitlessly according to as many variations of his name as I could think of, I started checking out the ships' passenger lists for the date I had. Nothing. Then I checked a different document I have, filled out by my aunt (his daughter), which gives 1889 for his year of arrival in the U.S.

Unfortunately, there is no month or date. So, you guessed it: I am searching through the passenger lists day by day, starting with January 1. Some ships can be eliminated right away, if for example, they sailed from someplace like Havana to New York. The rest, unfortunately, must be checked. I have no idea where in Russia (today's Poland?) he originated, nor from which port he set sail. Added to that, the scans of what I believe are microfilms of documents which are about 119 years old are not in the best of shape. We won't even talk about the so-called copper-plate handwriting!

Sorry. {Deep breath}. I just needed to vent a bit.

Still no progress on the mystery I uncovered in the 1900 census, either. Basically, I saw the name of a child listed that we'd had no idea existed. I imagine he must have died at a young age. I still don't know if my father ever heard about him, but his brother, who is a bit older than my dad, doesn't recall ever hearing the name, so it's unlikely my dad will know.

I always did enjoy a good mystery. I just hope that eventually I can solve this one!
Posted by AmyS at Wednesday, September 03, 2008

Om the genealogy search for my family, dates were sometimes different for the same person because one was the birth day, the other the Christening date and the difference usually less than a week. Also, there was a question on my dad's birthdate and that is because records were sketchy and men often lied about their age so that they could join the Army at a younger age and help fight WWII.

Good luck solving the mystery! I think the research would make me nuts. It's sad that there is no memory of the child. Lots of secrets in the past. Maybe the child was ill or there was some immigration against the child. There are many possibilities. Do you write at all? I can see a story plot about the child who was unable to continue the journey with her parents and was quarantined and then adopted by another family who were rejected at immigration and returned to their native country and her search for her real family, and what twists and turns that takes....