It's in the Mail 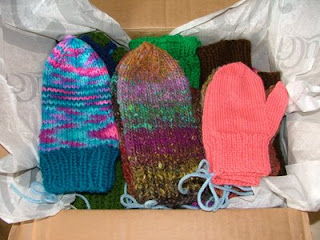 If I'm not mistaken, today was the day to send off all of the Mittnz (for the Mittnz Blitz 2008) to the Reservation. I sent off 6 pairs of mittens, two pairs of wristwarmers, and a hat. You've seen all of these projects before, so I just settled for this sort of squished group shot. Some participants made up to 50 pairs of mittens and/or wristwarmers (maybe even more)! It was fun to be part of the project.

Today was the first day of school for Liat and Meital, and for the first time in probably 11 years, I forgot to take pictures of them before they headed off. I was quite upset and annoyed with myself for having forgotten, but I've decided to take the Scarlett O'Hara approach. Much less stressful.

Avi and I are still working on the current translation project. It involves translating magazine articles about an Italian perfumer named Lorenzo Villoresi. There is a fair amount of repetition (no surprise there) as regards the information, so I have taken to using a game show approach as I read the English aloud to Avi for him to translate into Hebrew... "...the company was founded in...????" Of course, he knows all the answers! We're having fun with it, and it's great to have work to do every day. 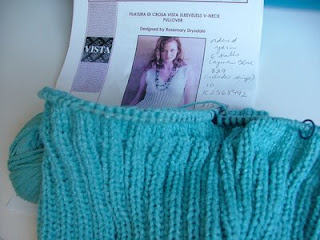 Despite the work, I've managed to work quite a bit on Liat's V neck top. It's done in Filatura di Crosa "Vista" yarn, and the pattern is free on Elann's website. Soon I'll be ready to start working back and forth on the front, then the back. The pattern is designed to be knitted flat, but there's really no reason to do so unless you happen to find inner peace and fulfillment in sewing up knitted seams.

I've also made some genealogy progress, albeit of a rather startling sort. I've uncovered a U.S. Federal Census from 1900 for my paternal grandmother's family that contained something unexpected. I need to write to my father and uncle and see if they are aware of this information. Meanwhile, I'm trying to do follow-up research, and not having much luck. Ah well, I've learned that the name of the game in genealogy research is patience.
Posted by AmyS at Monday, September 01, 2008

Love the mittnz. The colorway for Liat's sweater is beautiful. You and I have the same taste when it comes to yarn.

Ok, I'm in terrible suspense! Your blog today reminds me of a TV program where the storyline is continued to next week...so stay tuned....lol. I am patiently waiting to know what you have discovered in the 1900 census.

Mailing deadline for Mittnz is the END of September ::LOL:: but since yours have so far to travel, I'm glad you mailed them early.

I posted one of yours to today's blog entry.

Thank you so much for the knitting!