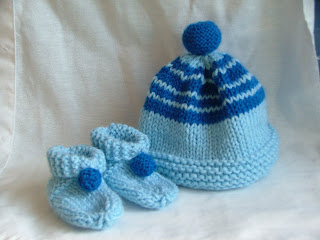 Avi walked into the house Tuesday morning, after a trip to the supermarket. I could tell that he was talking on his cell phone, but couldn't tell who was on the line. After he hung up, he told me that his cousin Ron and his wife had had a baby, and the bris would be on Thursday afternoon. As you can see, the first thing I did was pick up my needles. I cast on the first bootie at 11 a.m. on Tuesday, and by yesterday afternoon I was finished with the set. If I'd had more pale blue yarn, I probably would have tried to make a sweater, too. 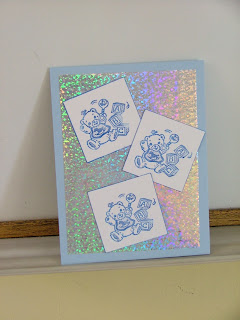 Today I turned my attention to the card. The shimmery paper is wrapping paper, the same paper I used to wrap up the booties and hat.

When we arrived, Avi told his aunt how I'd worked to make the booties and hat in time for the bris. She then told the new mother, who quickly took my gift off of the pile on the floor and tucked it into the diaper bag on the baby's stroller. No sooner had we arrived home this evening, when Avi got an SMS from his cousin, thanking me and exclaiming over the wonderful hat and booties, and how quickly I had made them. It's always such a great feeling to be appreciated. 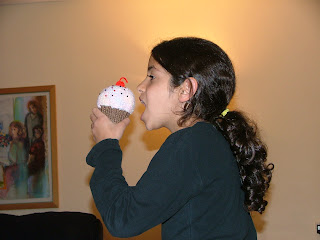 When I caught Meital in this pose last night, I realized I'd been neglecting my duties in the kitchen. 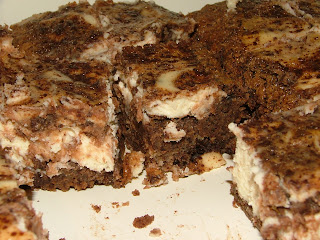 Today, I found the time to make these Cream Cheese Marbled Chocolate Brownies. The recipe was rather fiddly, and I forgot to let the eggs warm up to room temperature, so I had a near disaster with the chocolate seizing up. Luckily, everything came out okay in the baking, and these brownies have been endorsed by Meital, Liat, and Liat's friend Michal. I think they're pretty darn yummy, too. Very rich, but delicious.

Today was the first day in nearly two weeks that I didn't do any stitching. I hope to make up for lost time tomorrow...
Posted by AmyS at Thursday, February 21, 2008

The hat and booties are absolutely adorable. After looking at those brownies, I am hungry!!!

a short note -- Ijust got back form Stitches and I photos to uplaod, etc...

Darling hat and booties! Your pansy card is so cheerful!