Today's adventures actually began last night. I was all set to make another half-batch of pecan bars as requested by Avi. After all, it was Valentine's Day, and I'm such an expert now on measuring one-sixth of a cup, and all. 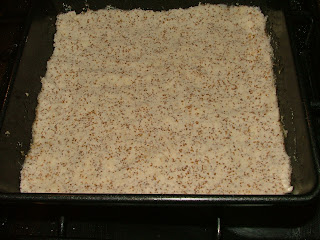 The crust came out beautifully. 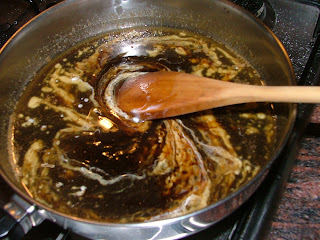 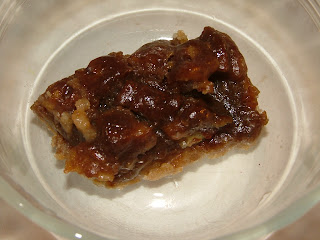 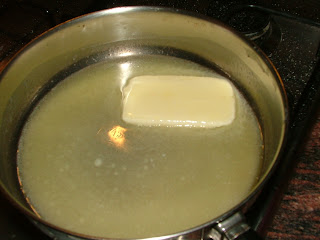 Oh yeah, now see this...Here's the problem! When I measured the butter for the topping, I forgot I was making a HALF batch. This is the full amount of butter. How embarrassing. Forget about one-sixth of a cup, I guess I need to work on my one-half of 115 grams of butter. Avi says he likes them this way. I say, don't get used to it, pal.

In fact, he liked my pecan bars so much, that today he made this: 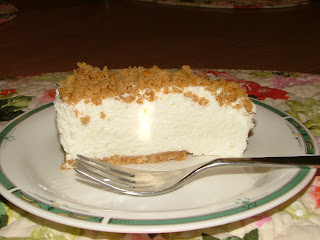 A no-bake, very creamy cheesecake (recipe from the back of a box of pudding). Trust me, it's light, smooth and luscious. I couldn't let that affront go unanswered, now could I? So after dinner, my cohort and I 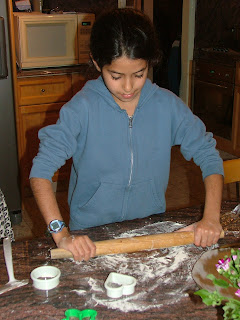 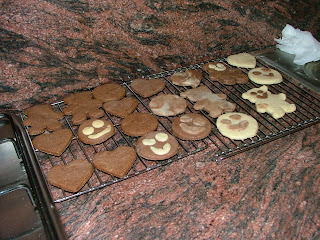 A basic sugar cookie recipe with about a tablespoon of unsweetened cocoa powder thrown in to slightly more than half of the dough. We like to make faces with the white dough on the brown cookies. Or vice versa. By the way, this is only about two thirds of the cookies. The rest were unavailable for a photo op on account of being in the midst of the baking process at the time.

The gauntlet has been thrown. The ball is now once again in Avi's court. Unfortunately, based on the contents of a pot currently on the stove, I'm afraid that Avi's next salvo is going to involve beans. And not the kind that grow on chocolate trees.

This could get ugly.

In other news, knitting, stitching, and stamping were accomplished today! Given the other demands on my time, though (what with being in a war and all) I must qualify that statement by saying that while I did do each of those things, it was "only a little."* The first Waffle Weave sock is done and the second begun, nearly all of the backstitching on the Spring Bunny is done, and I've started a card for a friend who will be having an operation next week.

* Am I the only person on the planet still quoting from Pirates of the Caribbean 1? Wait a minute, I know I'm not. Liat still does it, too.

Hate to say it but gooey pecan bars sure sound good to me! Love the picture of your daughter!!! Save it so that someday you can compile your own family cookbook with pictures and recipes.

Those look so yummy; I love your baking wars; now, I am not sure what your honey is going to make with beans, but I wager it won't be a dessert LOL.

Wow, now that's a fun competition to get into! Yummy!

We all quote from movies all the time: "Where's the rum?"

I could put on two pounds just looking at this post. Yum.