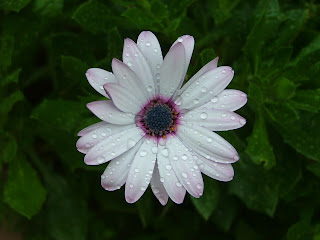 "Where are the songs of Spring?"
~ John Keats

Our balmy weather is gone again. The sky has turned gray and there are rumblings in the heavens. At least the rain held off until my girls were safely home from school. Oh, there were a few drips here and there, but so far we are waiting for the other drops to drop (in a manner of speaking). 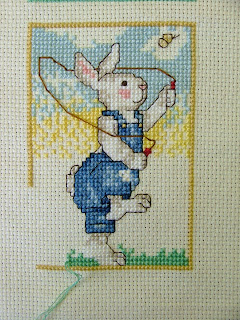 Looking at Summer Bunny makes me believe warmer weather will indeed arrive one day. Won't be long now before I'll need to make a border and figure out exactly what I'm going to do with this long, skinny picture of Four Seasons Bunnies. I have some ideas, so stay tuned. 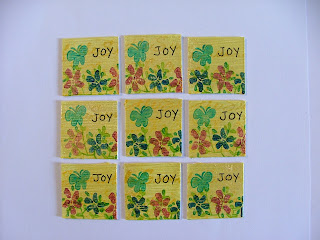 I got a chance to finish the inchies for the swap I'm in. I actually made ten, so there would be one for the hostess, too. The theme is flowers. This is the first time I have made inchies. They are awfully small, but so much fun! I will definitely be making more. 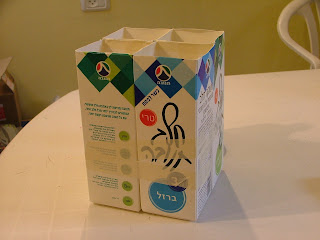 As for my "mysterious" new project, here's a sneak peak. It started like this, but I soon decided, "It's not enough." (Bonus points for the person who can name the movie this quote comes from. Lizzie, I know YOU know!). 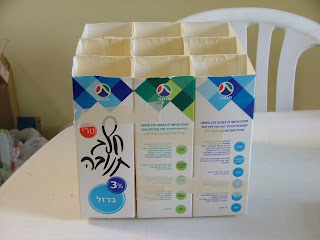 So here's what I have now. After all, if four is good, isn't nine better? Since this is going to be taller than it is now, I tried to think what I could use to weight the bottom so it wouldn't tip over. In the end, I decided to squirt a nice, big puddle of glue into the bottom of the milk cartons, then add some sand. It seems to be working well, but it will take a good while for the glue to dry completely. I hope it won't become considerably lighter once it is dry. 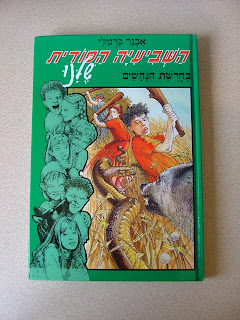 Yesterday, Avi suggested I do some reading in Hebrew, to brush up my vocabulary and spelling skills, which will be very helpful in our translation work. Today, Meital brought me this book to read. I don't know how many of you are familiar with Enid Blyton's series, The Secret Seven, but it was translated into Hebrew long ago and has been a favorite with Israeli children for years. The book shown above is an Israeli series based on the idea of Blyton's books. The series is called Our Secret Seven, and the whole first chapter of this book, the first in the series, is devoted to praise of the original series and an explanation of how this series owes its existence to Blyton's work. We have one of the original Secret Seven books in English; I've read it and enjoyed it. It's a bit dated, but then it was written at least forty years ago. So far, I've read two chapters of this book. It's not too easy, nor too difficult for me. I almost never read anything in Hebrew, except the occasional headline or subtitle. It's a revelation, seeing the words I know aurally in print. I don't know why I didn't do this years ago, but I suppose the time wasn't right.

That bunny is just too adorable for words! The milk cartons?????

I used to use milk cartons to make the candles that you put the ice cubes in and fill the milk carton, then pour the hot wax over them (making sure the position of the wick didn't shift) we decorated them with glitter and gave them as gifts as well as kept some. That bunny is adorable. I thought by now you read Hebrew, and here I was feeling you were so talented in your translating ::grin:: so Avi must the the writer of the words.

Doh now that I am staring at the leave your comment box I totally forgot what I was going to say!! :(

Oh .. I remember. The inchies. I made 2 sets of inchies so far, and find it rather challenging! When I see others inchies I think mine are just soo boring and plain heh. I really like yours! are they for a swap on ATCsforALL?