When last we saw our brown blob, it was in a near-embryonic state. We could see that it was brown, it was on double pointed needles, and it came to a rather unattractive point at the center. 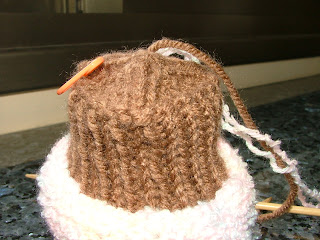 And as you can see, it still has the point. You can also see that there is an added bit of fluffiness to the blob now. I've figured out what to do to correct that unpleasant point at the center, but for now let's move on. 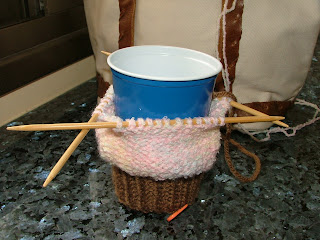 We need to make the brown base of our blob stable, so let's put a plastic cup inside. Oops! It's too tall; we'll need to mark where we need to cut it. I pressed my finger against the cup at the point where the brown yarn changes to pink, and started my mark around the cup from there. 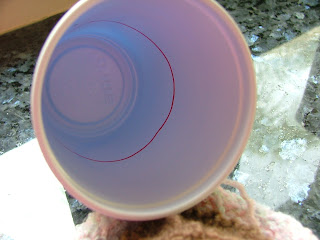 At first I thought I'd use a craft knife to cut the cup, but in the end I used my kitchen scissors. Then, because I'm a nut about such things, I put some masking tape around the cut edge of the cup. 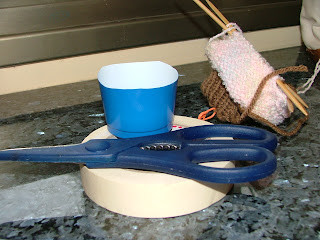 Next, we want to get rid of that point. I used a push pin to poke a hole through the center of the cup. Then I threaded a tapestry needle with the tail left by the cast on, and pulled it through the hole. I tied a couple of knots in the yarn as close to the bottom of the cup as I could. Then I taped the yarn down with a piece of masking tape. 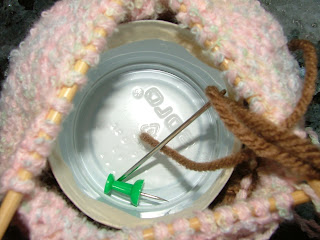 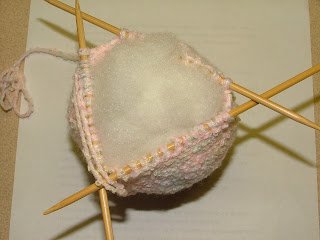 I finished up the knitting, added a few sewing pins, and voila! This is what our blob grew up to be: 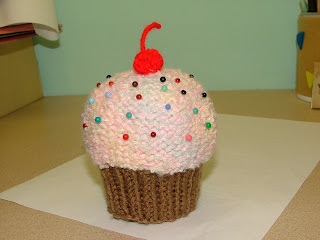 What a lovely cupcake! I made several modifications, and here they are:

This was a quick, fun project with a couple of awkward parts to it that fortunately were pretty small. Be sure to check out the links she has after her pattern, to cupcakes made by others. Some are absolutely beautiful!
Posted by AmyS at Tuesday, February 19, 2008

I love it, Amy! It's on my "to do" list for someone's birthday this spring. I saw the pattern in "One Skein", my new knitting book that I just absolutely love!

Aren't you smart? Very cute! I'm just gonna have to start knitting some food. So many designs to choose from: cupcakes, donuts, sushi, tea cakes!

That is very cute, I have a pattern for a donut pincushion I've be wanting to try and some wonton and eggroll catnip toys, also a baby blanket called Tiramisu. Kitting food must be the "in" thing. Is that what you call a "yarn diet"? :)

Thanks so much for the cup in the cupcake idea. I used it for mine and it helped so much!! :-)