One-Sixth of a Cup 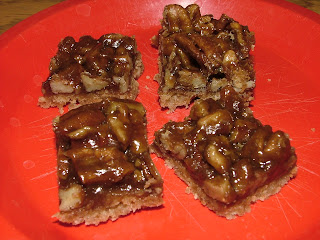 Yesterday I made a half-batch of the pecan bars I made on Thursday for Liat to take to her homeroom class. They were just as delicious this time around as they were the first time.

But halving the recipe was a bit trickier than I'd realized at first. The original recipe, which makes a 9 x 13" pan, calls for 1/3 of a cup of honey (or corn syrup, which is what I used). None of my measuring cups or cookbooks were of any help in determining exactly how much is one-sixth of a cup. Not even the inestimable Fanny Farmer.

First I tried what might seem like the easiest method of determining exactly how much 1/6 of a cup is. I filled the measuring cup to the one-third mark with water, then poured it out into measuring spoons. Turns out, one-sixth of a cup is half of 4 tablespoons plus 1 1/4 teaspoons (at least, according to my measurements). I don't know about you, but my math skills just weren't equal to the task of figuring out precisely how much that is. Neither, by the way, were my measuring spoons (the smallest size I own is 1/4 teaspoon). 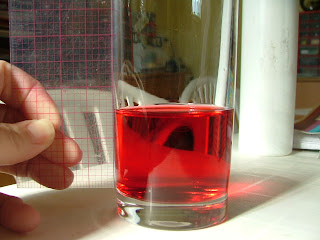 So here's what I did. I poured one third of a cup of water into a glass with straight sides - or as straight as I could find in my kitchen. Then I got out my trusty ruler and measured the height of the liquid. I then marked the glass with a crayon at the halfway point. Maybe what I ended up with wasn't exactly one sixth of a cup, but it was close enough for pecan squares. An 8 x 8" pan-full, to be exact.
Posted by AmyS at Sunday, February 03, 2008

I used to work for the government; that is why they say "close enough for government work"; I would have done pretty much what you did, LOL.

OMG, I had to chuckle because I don't know that I would have that much patience to figure all that out....but you did a great job of doing it!

Two Tablespoons + 3/4 teaspoon would have been close enough....

However, measuring works, too.

Being old and crotchety, myself, I'd have eyeballed half of a third cup measure..... :)